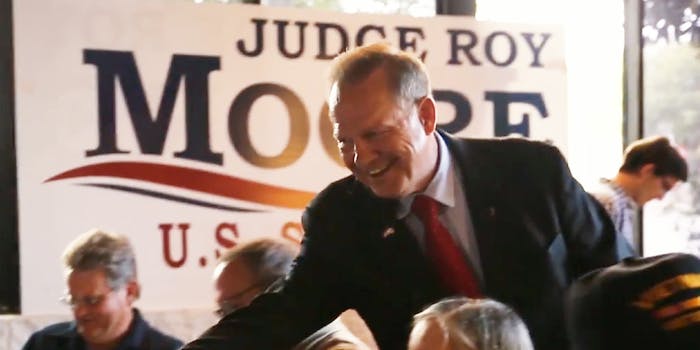 She joins other woman who have accused Moore of sexual misconduct.

A woman said on Monday that Roy Moore, the Republican Senate candidate in Alabama, attempted to rape her when she was 16, joining several other women who say the former judge engaged in inappropriate sexual conduct or sexual assault with them when they were minors.

Beverly Young Nelson, speaking during a press conference in New York with attorney Gloria Allred, said Moore attacked her in 1975 outside of a restaurant where she worked, the Daily Beast reports. The New York Times reports that Nelson said he offered to drive her home after her shift ended at the Olde Hickory House, but instead of doing so, he parked behind the restaurant and assaulted her.

“I tried fighting him off, while yelling at him to stop, but instead of stopping, he began squeezing my neck attempting to force my head onto his crotch,” Nelson reportedly said. “I was determined that I was not going to allow him to force me to have sex with him. I was terrified. He was also trying to pull my shirt off. I thought that he was going to rape me. I was twisting and struggling and begging him to stop. I had tears running down my face.”

According to the Times, Moore told Nelson that “no one will believe” her if she told anyone about the attack.

Here is a comparison of the handwriting in Young's yearbook to a signed Roy Moore biography. It matches. pic.twitter.com/GFTOKeNbT9

Nelson is the fifth woman to publicly say Moore engaged in some kind of sexual misconduct with them when they were minors. The latest testimonial comes amid growing pressure from Republicans—including Senate Majority Leader Mitch McConnell—calling for Moore to drop out of the Alabama Senate race.

Last week, the Washington Post published a report that detailed four women’s accounts of Moore pursuing relationships with them when he was an adult and they were teenagers. Three women said he did not pursue any sexual advances toward them; however, one woman, Leigh Corfman, said he sexually assaulted her when she was 14.

Moore has denied the accusations, calling them “fake news” and “garbage.” He also responded to McConnell’s call to drop out of the race with defiance, saying McConnell is the “person who should step aside.” Far-right website Breitbart has posted several reports attempting to discredit Corfman in defense of Moore, whom Steve Bannon—one of the website’s highest ranking members and former adviser to President Donald Trump—campaigned for in the runoff election that led to Moore’s candidacy in Alabama.

Moore also made a fundraising plea amid the accusations, calling the Post‘s initial report a product of the “Obama-Clinton Machine.”

In a statement to the Times, Moore’s campaign called Allred, a lawyer who has represented sexual assault victims, a “sensationalist” who was leading a “witch hunt.”

As the Times points out, the potential election of Moore amid numerous accusations of sexual misconduct could put Republicans in a precarious position.

The Senate could try an stop Moore from being seated, or they could seat him and immediately expel him. Sources told the newspaper that Alabama Gov. Kay Ivey could block him immediately and appoint Jeff Sessions to the seat he vacated to become Trump’s attorney general earlier this year.

McConnell also reportedly said Republicans are discussing having a write-in candidate campaign for the seat in the December election.

You can read more about Nelson’s story here and here.