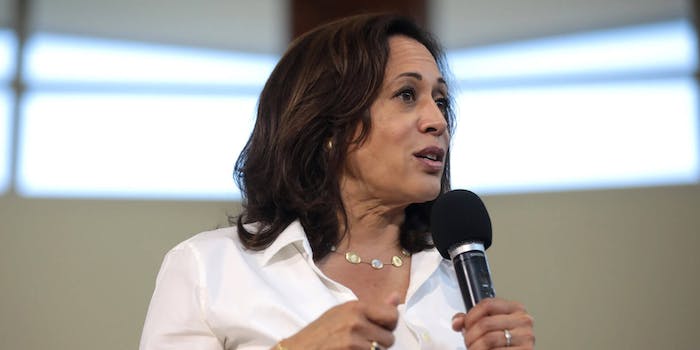 The plan would overhaul several aspects of the country's criminal justice system.

Sen. Kamala Harris (D-Calif.), one of the many Democrats hoping to win the party’s nomination for president in 2020, released a sweeping criminal justice plan on Monday that aims to legalize marijuana, end cash bail, and ban private prisons.

The plan, which was outlined in a blog post on Medium, calls for a number of changes in the country’s criminal justice system.

Harris’s campaign said in addition to legalizing marijuana, she would expunge past convictions. The plan also outlines her recently-introduced Marijuana Opportunity Reinvestment and Expungement Act, which she said would also create grant opportunities to those who have been “most adversely impacted” by the War on Drugs.

The plan calls for a number of other policies that liberals have embraced, including: ending mandatory minimum sentences, ending private for-profit prisons, supporting a national standard for the use off deadly force by police, creating a police systems review board to review police shootings and misconduct, demilitarizing police departments, and ending the use of money bail, among other things.

Harris’s plan does not go as far as Sen. Bernie Sanders (I-Vt.) on the use of facial recognition technology by law enforcement.

While Sanders called for an outright ban on law enforcement use of the technology, Harris said she would work with a number of stakeholders and groups to “institute regulations and protections” to ensure that it “does not further racial disparities or other biases,” adding that she would use federal money to try and push states to do the same.

The use of facial recognition technology has been criticized by both Democrats and Republicans, and a coalition of more than 30 groups have endorsed a call to institute a federal ban on the use of it by law enforcement.