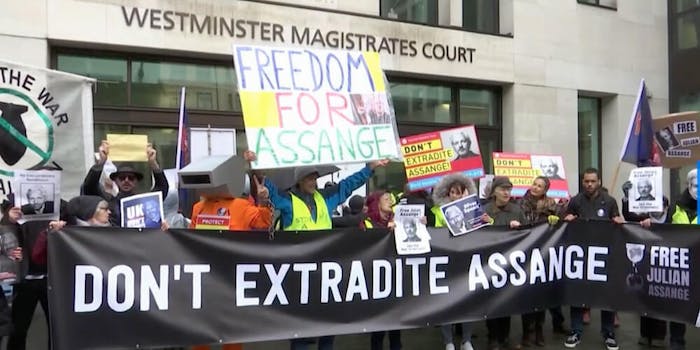 Assange’s team hoped for additional time to prepare their case to fight his relocation to the U.S.

WikiLeaks founder Julian Assange expressed his frustration at the unfairness of his legal fight against U.S. extradition in a British court on Monday. He claimed he was denied the tools needed to defend himself as the judge refused his team’s request for more time to prepare.

The 48-year-old appeared in person for the preliminary court hearing at London’s Westminster Magistrates’ Court clean-shaven and in a navy suit, his first public appearance since May.

Assange’s legal representative Mark Summers QC argued that the extradition hearing, scheduled for February 2020, should be delayed by three months due to rising complexities with the case.

Assange is set to fight against relocation to the U.S., where the Justice Department charged him over his work with WikiLeaks in an 18 count indictment–which includes violating the Espionage Act–focused on the publishing of thousands of classified Iraq war military files in 2010.

Summers cited difficulties in being able to communicate with Assange on legal matters in preparing their defense and claimed that U.S. intelligence had illegally violated his client’s legal privilege by spying on their communications.

“This is part of an avowed war on whistleblowers to include investigative journalists and publishers,” he said. “The American state has been actively engaged in intruding into privileged discussions between Mr. Assange and his lawyers in the embassy, also unlawful copying of their telephones and computers and hooded men breaking into offices.”

Spanish courts are currently investigating a private security firm reportedly hired to work with the U.S. to surveil Assange during his years residing in asylum within London’s Ecuadorian embassy. The firm worked to “obtain information by unlawful acts, thefts, and clandestine surveillance” and “with increasing intensity from 2017 onwards,” according to Summers.

Despite Summers’ arguments, District Judge Vanessa Baraitser flatly denied the request of an extension and said that the first full hearing will take place on Feb. 25. She asked Assange if he understood, to which he replied, “not exactly.”

“I don’t understand how this is equitable,” Assange said. “This superpower had 10 years to prepare for this case, and I can’t access my writings. It’s very difficult where I am to do anything, but these people have unlimited resources.”

Assange is still being held at London’s Belmarsh prison, despite having already completed his sentence for skipping bail.

“[U.S. authorities] are saying journalists and whistleblowers are enemies of the people,” he continued. “They have unfair advantages dealing with documents. They [know] the interior of my life with my psychologist. They steal my children’s DNA. This is not equitable what is happening here.”