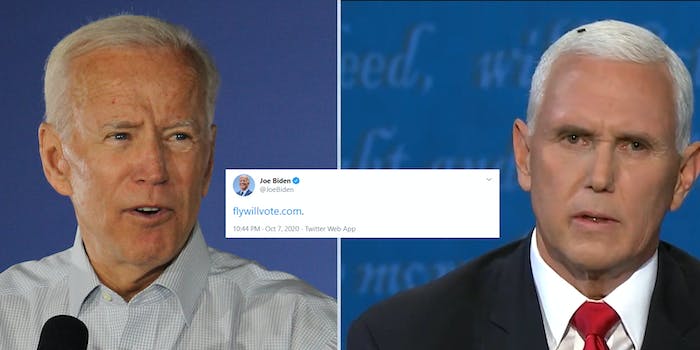 During the debate, Pence had a fly land on his head and it stayed there for around two minutes. The unexpected guest during Pence’s debate with Sen. Kamala Harris (D-Calif.) immediately went wildly viral.

And Biden’s team is immediately cashing in on the virality.

Around the end of the debate, Biden tweeted out “flywillvote.com,” which redirected to “iwillvote.com,” a DNC site that allows people to see if they are registered to vote, register to vote, or learn more about voting in person or voting by mail.

It wasn’t even the first Pence fly related tweet Biden made during the debate. Just a few minutes earlier the former vice president tweeted a picture of himself holding a fly swatter, asking his followers to donate $5 to “help this campaign fly.”

For a candidate that once mixed up a text message and website, the quick internet trolling is a step up.