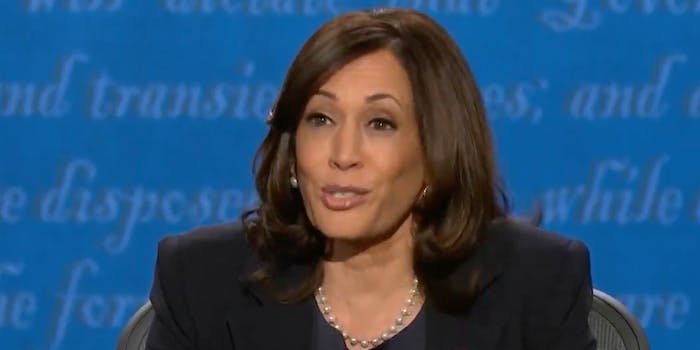 It's the same smear from a month ago.

Sen. Kamala Harris (D-Calif.) said she would not take a coronavirus vaccine if it was only approved by President Donald Trump at the vice presidential debate on Tuesday.

The right has tried to label Harris as an anti-vaxer and as someone who does not believe in the science behind vaccines. But, as Harris has repeatedly said, it’s not a distrust in vaccines but rather in President Donald Trump pushing it during an election. When prompted if Harris would take a vaccine, she said only if guided by public health officials.

“If the public health officials, if Dr. Fauci, if the doctors tell us to take it then I’ll be the first in line to take it. Absolutely. But, if Donald Trump tells us that we should take it, I’m not taking it.”

Naturally, she was called anti-vax and anti-science by Pence.

This isn’t the first time Harris expressed concerns about a Trump vaccine.

She told CNN in September: “I think that we have learned since this pandemic started, but really before that, that there’s very little that we can trust that comes out of Donald Trump’s mouth.”

But, the right still maintains that Harris is anti-vax and it is spreading on Twitter.

“Kamala Harris says she will not take a vaccine if ‘Donald Trump tells us to take it.’ This is dangerous, anti-vax rhetoric. #VPDebate,” Trump campaign member Abigail Marone tweeted.