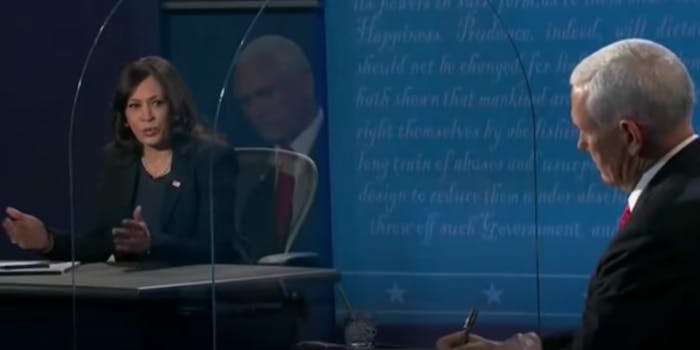 'When Kamala said 'IM SPEAKING' every single woman felt THAT.'

Sen. Kamala Harris (D-Calif.) did not let Vice President Mike Pence interrupt her at the vice presidential debate on Tuesday.

Harris repeatedly told Pence it was her turn to speak, and the now-coined phrase “I’m speaking” is going viral online.

And it seems that every woman who has ever been “constantly interrupted, talked over, disregarded, mansplained to” felt that.

The moments even inspired “I’m speaking” T-shirts. “GET ME AN ‘IM SPEAKING’ SHIRT ASAP PLZ, THANK YOU,” one user tweeted.

“This debate is such a different vibe & I’m here for it. @KamalaHarris did not come to play. “Mr. Vice President Im speaking” #Debates2020 #KamalaHarris,” another wrote.

“‘i’m speaking….. IM SPEAKING’ she really told his dumbass to stfu,” another added.

The debate was the first and only match between the two vice presidential nominees.