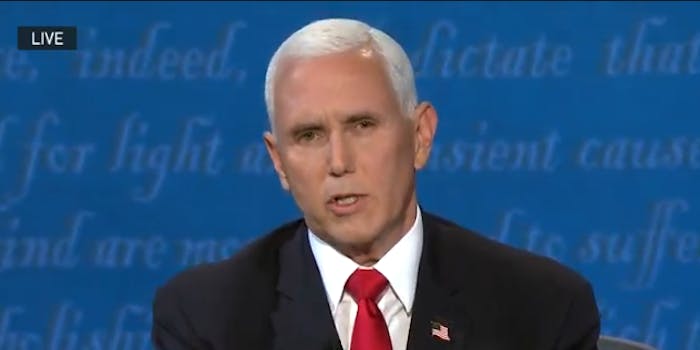 It was quite the non-sequitor.

Wednesday night was the first and only debate between the 2020 vice presidential candidates.

This was one the internet was waiting for.

In the latter half of the debate, moderator Susan Page, the Washington, D.C. bureau chief for USA Today, asked Pence, who is notoriously anti-choice, about his position on reproductive freedom.

Page asked Pence if he would urge his home state of Indiana to outlaw abortion if Roe v. Wade, the landmark U.S. Supreme Court case that helped legalize abortion, were overturned.

Pence’s response was a scene out of Dodgeball: A True Underdog Story: dodge, duck, dip, dive and dodge. He launched into a lengthy soliloquy about … ISIS.

He also discussed the raid against Osama bin Laden, highlighting how Joe Biden had doubts about it.

“Pence: ‘Wow let me dodge this question that’s going to make me sound like an extremist on abortion by getting back to Soleimani,'” Liz Mair said.

“I can answer the question Pence was asked and is ignoring—he does want to ban all abortion and has said so many many many times,” Lily Adams tweeted.

Pence later clarified. “I am pro-life,” he said, but did not address the specific question about if he would support a total ban.