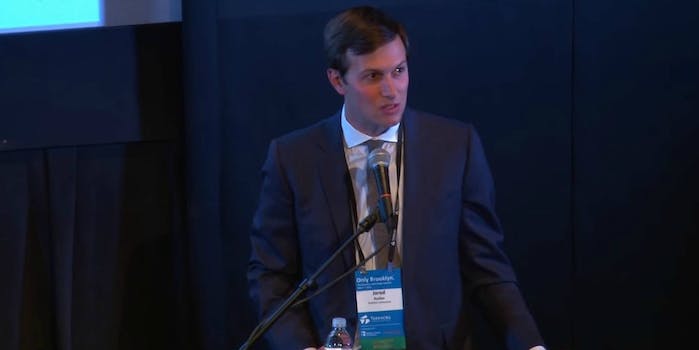 Jared Kushner's cousins made their thoughts known in Facebook posts.

Jared Kushner is the publisher of the New York Observer and perhaps the husband to America’s next vice president, but for now, he’s recognized primarily because his father-in-law is presumptive Republican presidential nominee Donald Trump.

Trump is still facing backlash over what many perceived to be an anti-Semitic tweet that referenced Hillary Clinton, which eventually resulted in Trump dragging Elsa from Frozen into the fray. In response, Kushner wrote a piece for the Observer, titled “The Donald Trump I Know,” in which he defended Trump, said he wasn’t anti-Semitic or racist, and told the story of his relatives’ experience in the Holocaust.

Now, other members of Kushner’s family are irate that he described the ordeals of his grandmother and her family as they tried to escape the Nazis. And they took to social media to air their complaints.

I don’t think Trump is an anti­-Semite; I think he’s a lying idiot (among other things) with little to no experiences outside his teetering fiefdom of failed development projects, divorces, bankrupted sports leagues, fraudulent ‘Universities’ and golf courses (and the list keeps going). The very first thing a responsible campaign manager should do, I’d think, and I mean the very first thing, would be to take away his father-­in­-law’s Twitter account

Another cousin wasn’t pleased either.

In his Observer piece, Kushner—who’s married to Ivanka Trump—told the story of how his grandmother’s sister was one of about 5,100 Jews to be killed in Novogrudok, and he described how his grandmother escaped the Nazis through a city tunnel that led to the woods outside the city.

He also wrote: “The fact is that my father in law is an incredibly loving and tolerant person who has embraced my family and our Judaism since I began dating my wife. His support has been unwavering and from the heart. I have personally seen him embrace people of all racial and religious backgrounds, at his companies and in his personal life.”