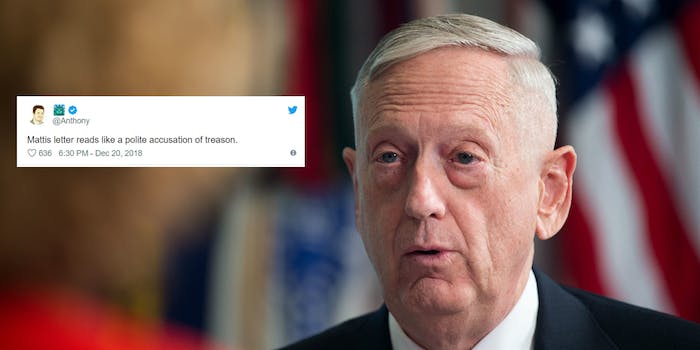 Defense Secretary James Mattis announced Thursday that his tenure will end in February. President Donald Trump called his leaving a retirement, but to everyone else looking on, it seems an awful lot like a resignation.

Perhaps that’s because Mattis’ letter announcing the news, which quickly circulated on Twitter, takes on a passive aggressive tone.

“While the U.S. remains the indispensable nation in the free world, we cannot protect our interests or serve that role effectively without maintaining strong alliances and showing respect to those allies,” the letter reads. Perhaps most damning, he says Trump has “the right to have a Secretary of Defense whose views are better aligned with yours on these and other subjects.”

The news comes just one day after the White House announced it would be withdrawing all troops from Syria, the latest in a series of decisions that have gone directly against Mattis’ opinion. He also opposed the U.S.’s withdrawal from the Iran nuclear deal and Trump’s order to ban transgender troops, among other issues. Rep. Seth Moulton (D-Mass.) summed up their disagreements in a handy list.

Vox founder Ezra Klein said Mattis’ statement “reads more like a break-up letter … Translation: It’s not me. It’s really, really you.” Another Twitter user described it as “a polite accusation of treason.”

Several Twitter users including Sen. Marco Rubio (R-Fla.), who was Trump’s opponent in the 2016 Republican primaries, expressed harsh words directly and indirectly at the president. Both representatives and public alike, though, somberly spoke of a dire future for the country.

Just read Gen. Mattis resignation letter. It makes it abundantly clear that we are headed towards a series of grave policy errors which will endanger our nation,damage our alliances & empower our adversaries. 1/2 pic.twitter.com/ztc0Yihccn

But now the senior members of the cabinet consist of a man who locked himself in an elevator and a woman who thinks kids at schools need guns for bears.

Never been more alarmed for the nation since coming to D.C. over three decades ago. https://t.co/gmzADF5z9r

Translation: you ****ed our allies, **** you. Mattis resigns after Trump declares unilateral pullout of Syria… pic.twitter.com/uOjJyRo6Oq