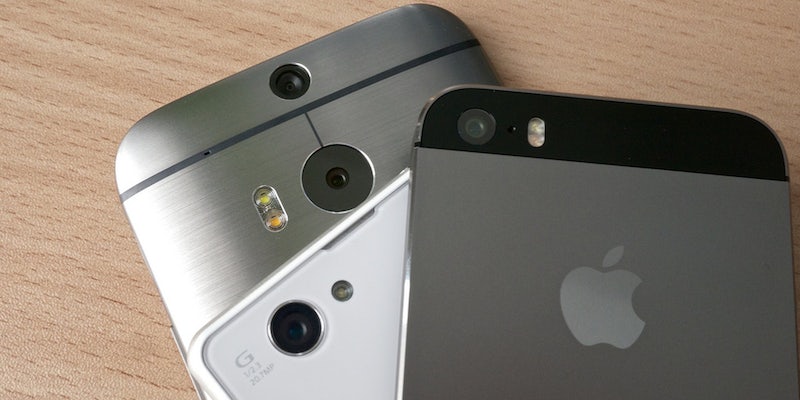 The new iPhones are here, which means it’s the time of year when all those Android diehards try to get the world to believe that Apple isn’t all it’s cracked up to be. Some might even go so far as to write an article about how their 2010 Android phone is actually just as good as the iPhone 6, but we all know the truth.

The truth is that the iPhone is better now and it has always been the superior choice for smartphone users, and not just for the hardware, but for the ecosystem and cohesive experience that you are buying into when you select a shiny new iPhone as your next personal gadget. Here are five things that make the iPhone experience second to none.

Choice is only a benefit when it’s meaningful choice, and while Android’s massive number of devices from various manufacturers might seem like a good thing, it results in a sub-par user experience for many. 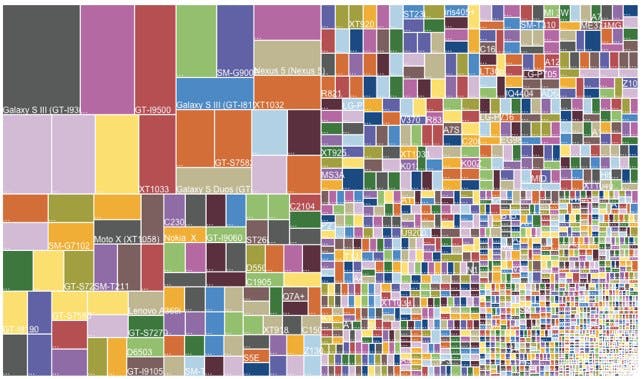 Take a look at the graph above. No, it’s not a collection of all the color swatches from Home Depot, it’s a chart showing Android fragmentation as of August 2014. Every single square you see is a different Android device, and according to research firm OpenSignal, there are over 18,000 of them. That’s 18,000 kinds of Android devices that developers have to worry about, which means things like optimization and universal support go straight out the window.

With far fewer devices to consider, even going back as far as the iPhone 4 from 2010, developers making apps for iOS are able to actually test how they work on each device, rather than waiting until enough users complain of a device-specific bug as they so often do with Android apps. On top of that, the iOS operating system is updated across the board on devices three years old or newer, whereas many Android users are forced to rely on manufacturers and wireless carriers to push updates out the door.

Speaking of apps, Apple’s App Store is the place to be if you want the latest updates on the best and brightest apps. Due to its fragmentation, Android often plays second fiddle to iOS releases, and sometimes never gets its own version of top-selling iOS apps. You want to play a hit indie title like Monument Valley on Android? Sure you can, you just have to wait until the iPhone gamers have been enjoying it for over a month. How about insanely popular games like the Infinity Blade series and Hearthstone: Heroes of Warcraft, or amazing apps like Dark Sky and Fling? Oh, Android never got any of those, sorry.

An extremely detailed report that was released earlier this year from security firm F-Secure (PDF) declared that 99 percent of all mobile malware is targeted at Android users. The platform’s fragmentation—which leads to updates not being applied universally and a massive number of hacker-friendly vulnerabilities that go untreated—is to blame. And it’s not just through Web browsing that these malicious programs can end up on your Android gadgets; You can download them directly through Google’s own app marketplace. Want a safer mobile experience? You’re going to end up with an iPhone.

When you buy an iPhone from the Apple Store it’s the exact same iPhone that you’d get if you bought it at an AT&T store, a Verizon outlet, or even at Wal-Mart. On the other hand, the same Android phone may offer a completely different user experience depending on where you buy it, as carriers and manufacturers absolutely love to cram useless programs, utilities, and performance-hindering skins on top of what is otherwise a perfectly functional operating system. In fact, many people who claim to not like Android have probably never really used Android as it is intended, but instead have fallen victim to what is collectively referred to as “crapware.” That’s something you simply don’t have to worry about with the iPhone.

Having been an iPhone user since 2008, and having upgraded each and every year, I’ve had a total of two issues with my various iPhones. One—I believe it was the iPhone 4S—had a faulty lock button which began giving me trouble about a year after I bought it, and the other was an iPhone 5 battery that couldn’t hold a charge. This is where the Apple Store comes in handy, and it’s something Android users would know nothing about.

Both times that I ran into trouble I walked into my local Apple Store, gave them my device and my Apple ID, and walked out with a brand new iPhone within 15 minutes. No paperwork, no explanation, and not a single cent was demanded of me—this is all despite the fact that my iPhone 5 was particularly beat up, and had a rather large gash on the display. There are people that like to poke fun at Apple Stores, their employees, and the “cult” atmosphere of it all, but if it is a cult, it’s a remarkably courteous one.

Yes, both platforms have their plusses and minuses, and while the iPhone might only now be catching up—as it is with a larger display size and widgets—Android manufacturers certainly have a bit of work to do in their own right. Competition is good, and the fact that both platforms have loyal fanbases is a great thing. But the iPhone is better. Just saying.