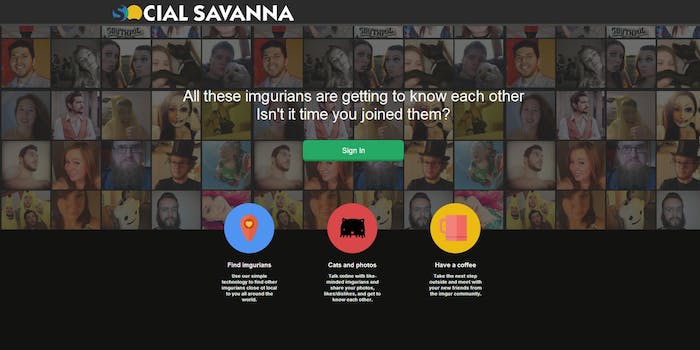 A place for Imgur users to call their own

Imgur, the photo-hosting site that started as a place to host material for Reddit, now has its own exclusive social network.

First, let’s go back to the beginning.

Imgur started as a gift to Reddit back in 2009. Creator Alan Schaaf came up with Imgur as an alternative to Photobucket and Imageshack, since Reddit users were annoyed with those services. But just like the Swiss guy who wanted to create a way to get cockleburs out of dog hair and accidentally invented Velcro, Schaaf’s creation’s reach far exceeded its aim.

At first, Imgur was a great gift for Reddit, and the two services had a mutually beneficial relationship. Redditors loved that they had a convenient way to post images, and even though the site wasn’t immediately profitable, by 2012 Imgur was cracking 1 billion views a day.

Imgur was the perfect tool for hosting images to post to Reddit and other social sites like Digg. Now it’s less of a tool and more of a complementary service that people use as an idea and image exchange and not just a hosting solution. Tellingly, Imgur gets more traffic than Reddit.

This is all good news for Imgur. People love it. It doesn’t even really need Reddit anymore; the student has surpassed the master. The only problem is, Imgur delivers what it set out to deliver and then some, but it isn’t really set up to foster the kinds of relationships that have grown among members. Originally the service didn’t even have custom accounts, and the focus remains on image-hosting, not chatter among the image-hosters.

Social Savanna debuted last week and had 15,000 signups in the first day, and at writing, 22,000 Imgur users had signed up. The response was so overwhelming that the creator, an Imgurian named James who goes by the username TheBritishAreComing, had to limit access to users with over 1,000 points. Points are accumulated by upvotes, so that means only active members of the Imgur community can currently log on. But, as he mentioned in an Imgur post, there are plans to reduce that barrier soon, and it’s already been dropped to 800 points.

In an email, James explained he wants to build a democratic network. Case in point, the previously mentioned barrier was put to a group vote. “My hope is that we’ll get rid of the point limit and just do it based on age of account but that obviously is up to the growing community… we want a bit more of a personal touch on this social network.

“Many networks have become too big and faceless,” James wrote. “The Internet is changing and we want a more creative effort, whilst we have our own ideas we really want the community to be part of that.”

So far, the features James and his small team are pursuing are nearly-guaranteed crowd pleasers, like multiplayer games for classics like Pong, chess, and checkers. There are also plans for more sophisticated games down the line. He’s also preparing a space for users to comment on submissions as they’re uploaded in real time. And there’s already a group chat and private message functions in place.

And what’s it like on the inside? This Daily Dot writer isn’t cool enough on Imgur to get over the point barrier, so it’s hard to say. Some users have complained to the Social Savanna Facebook group and on Twitter that the chat has grown too cliquey, but many others remain excited, so we’ll have to see. James describes Social Savanna as a “small” network, but it may end up growing out of its ambitions, just as Imgur did.