Six months before the entire world knew his name, Edward Snowden threw a CryptoParty in Hawaii with privacy researcher Runa Sandvik in an effort to teach locals how to protect their online privacy from threats as big as the National Security Agency or Google. Twenty Hawaiians attended the workshop taught by Sandvik and Snowden, who later called the event a “huge success.” 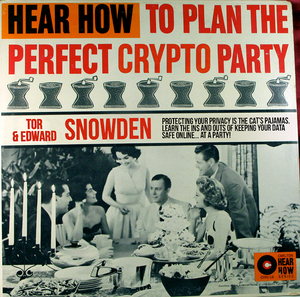 CryptoParty was conceived in 2012 as a global grassroots movement to teach cryptography to the public. Anonymizing tools like Tor and strong file encryption like TrueCrypt are introduced and explained at free public workshops so that more of the population can learn about the threats against their information in cyberspace.

Household names like the Electronic Frontier Foundation and NSA whistleblower Thomas Drake have expressed support for CryptoParty, but the genius of the endeavor is that absolutely anyone can organize and attend a workshop in any corner of the world.

If you’d like to throw your own party, it’s as simple as finding a time and location. Snowden decided on a Sunday night in a hackerspace in Honolulu, a place with good Internet connectivity and power. You could use a school, library, or bar with decent Wi-Fi.

Most importantly, the entire event should be as free as possible. The location should be free for the public to enter, so that even those with few resources can learn about what the party has to offer. Organizers should try to bring USB sticks, old computers, and printed handouts so that anyone can learn by doing.

Off-the-radar meetings are encouraged when circumstances don’t allow for openness. Activists and journalists in vulnerable areas have a lot to lose—but even more to gain from learning about cryptography.

If free entry is the most important aspect of CryptoParty, simplicity is the next. Newbies should be able to learn how to use Tor and PGP at a meeting, two relatively easy tools that make for a powerful privacy arsenal.

“Organise organically and chaotically,” the CryptoParty handbook recommends. “Have no clear leadership.”

Anyone can take on leadership roles to teach, learn, organize, or maintain important facets of the CryptoParty like the wiki or even the meeting’s wi-fi. Giving these roles to different people makes them more heavily invested and interested in the movement.

Finally, invite everyone. Invite journalists to learn and promote the party, experts to teach, and laymen to learn.

The core goal is to promote privacy as a fundamental right for everyone, not just programmers and nerds who know what a command line is. If a CryptoParty can teach important cryptographic concepts while serving pizza, beer, and fun, it’s mission accomplished as far as party headquarters (which, by the way, doesn’t exist) is concerned.

Promoting your party is simple. The entire CryptoParty website is designed to help you do it, just head over and edit your party in. Twitter is where CryptoParty was born and continues to live, so promoting it there will get you important retweets by the biggest and baddest parties around, thus spreading the news far and wide.

Even beyond CryptoParty, a strong movement to make powerful encryption knowable and available to everyone is gaining momentum daily.

There’s a long way to go yet. When mom and dad can protect their emails without a second thought, we’ll know we’ve reached a new plateau for Internet privacy.