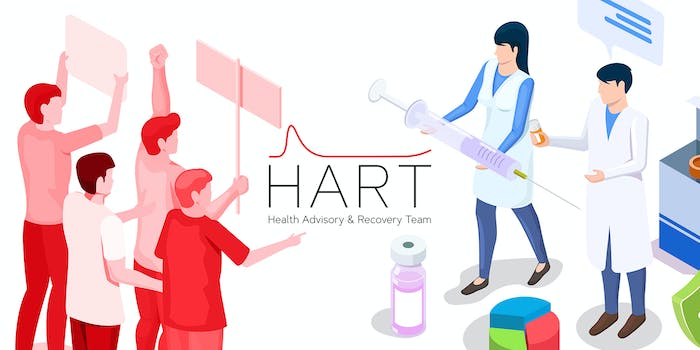 HART's sourcing is dubious at best.

The beginning of 2021 was a sign of marked hope for a great many across the globe. After an interminable year of mass casualties, lockdowns, and fear, COVID-19 vaccines were exiting clinical trials and entering the arms of a hopeful public, desperate for protection from the coronavirus.

But inside the chat rooms of HART, the rollouts of Pfizer, Moderna, and other vaccines were more terrifying than any apex of the pandemic. In Gibraltar, 53 people were dead from getting their shot. In a nursing home in Spain, 46 people were killed as a result of inoculations. Grandmothers were having strokes immediately upon injection, and everyone was still getting sick.

Unfortunately for HART (Health Advisory and Recovery Team)—a group of prominent proponents of an anti-vaccination, anti-lockdown, anti-mask strategy in the United Kingdom—news stories, tweets, and Facebook posts it was using to raise internal alarm came from dubious sources, accounts that were since suspended and deleted by major social media platforms, and third-hand claims without vetting. Rarely was skepticism expressed in the chats. More often than not, users appear to readily lend credence to any account.

The claims appeared to stoke a climate of concern in their internal communications, as the group pushed its own separate anti-vax content out into the world.

HART describes itself as a collection of “highly qualified UK doctors, scientists, economists, psychologists and other academic experts” who have been influential in shaping the debate over COVID-19 in the United Kingdom. But while they pledge themselves to be an independent ballast against groupthink on COVID, leaked conversations on Rocket.Chat obtained by the Daily Dot from DDoSecrets, a journalist collective, show the group was just as prone to hyperbolic, frightened thinking as the public they seem to disdain for freaking out over COVID-19.

The Rocket.Chat room “#vaccine-reactions” got rolling in January 2021 and was used to flag disconcerting responses to vaccination. It had 67 members from the organization and over 1,700 messages. While the channel was supposedly for “Post vaccine analytics only please,” it became a home for anecdotal, rather than analytical analysis. The information they shared came from Twitter accounts that were later suspened, websites banned by major social media networks for disinformation, and friends of a friend who knew someone who heard their parent had adverse reactions.

One of the first posts shared the room was by a Twitter user named Rambo5251, who follows one person and has no followers himself.

“My Nan had her first vaccine yesterday and is now in the hospital suspected of suffering a stroke … she is now occupying a hospital bed she wasn’t before the vaccine.”

It was a reply to a more viral tweet by a U.K. politician. In fact, a great number of tweets shared in the group were replies to viral tweets, indicating that someone was trawling posts looking for these. And anyone familiar with the replies of anyone even remotely famous knows that down there, it’s a haven of self-promotion and misinformation.

One of the group’s co-founders, Graham Hutchinson, noted that he had a person amassing these replies, and plenty to share, which he routinely did in the chat.

Hutchinson declined to comment to the Daily Dot. HART did not respond to a request for comment.

No word was given on whether these were being vetted, like a tweet from @FlimsyBox who said that in his “mum’s care home” they’d never had a single case of COVID-19 until after the vaccination, and now six workers and six residents had tested positive.

The sheer number of these sent in though shows minimal critical analysis of any of these claims. The Daily Dot reviewed messages in the room from January to April. Skepticism was rarely present, instead sympathy was often offered for events that may or may not have happened.

“This is so sad. Feels like the most vulnerable are the cannon fodder in this mass experiment,” wrote one member to a tweet from a person with zero followers.

Other random Twitter users often cropped up. Several of the tweets flagged in HART’s messages were written by Twitter users who were later banned from the platform.

In May, one HART member shared a link to a tweet from @sapiofoxxxxxxxy that said “A mother of 2 is dead 10 days after receiving the #AstraZeneca gene therapy. Do not tell me this is a concidence…the coroner has confirmed the [unviewable emoji] killed this lady.”

The HART member commented on it: “This is another tragedy. Looking at age at time she would have been part of the all encompassing ‘high risk group.’”

The account had over 2,000 followers at the time of the archived snapshot and jokingly wrote about not being able to “ask the staff what’s in the syringe!!” and used the hashtag #vaccinesideeffects.

The @sapiofoxxxxxxxy account also tweeted about avoiding vaccinated people, tweeting: “God knows what they’re shedding.” The idea of the COVID-19 vaccine “shedding” from one person to another is a prominent conspiracy theory that has been debunked.

Meanwhile, in mid-April, a member of the HART group posted a tweet from @Jackiedoran10.

They shared a purported image of a document from “someone who works” in the U.K.s National Health Services. It claimed “They KNOW the V.X. is NOT safe and are acknowledging it internally.”

The team in the chat also relied on a frequently debunked site known as LifeSiteNews to get their news about vaccine deaths. LifeSiteNews was permanently banned from YouTube for persistent disinformation around COVID-19 in February. Six days after the ban, links to LifeSiteNews were still being shared in the chats.

Members posted articles about deaths post-vaccines in Gibraltar and Spain. LifeSiteNews said nearly 100 people died after vaccines, stories which have been thoroughly debunked.

“That’s just horrible, it really is. I’m not sure anyone really wants to listen though,” wrote one member about vaccine deaths in Gibraltar that never happened.

MedicalKidnap.com was another site that was shared in the chat, with similar claims people had died from a result of the vaccine. On its site, it hosts a memorial to what it says are the over 30,000 people who died in the U.S. and U.K. from the “COVID-19 bioweapon shot.”

Also making an appearance in the chat was Epoch Times, another far-right publication that has pushed coronavirus misinformation.

The leaked chats also linked to Alex Berenson, a former reporter who the Atlantic called “The Pandemic’s Wrongest Man.” As the news outlet notes, Berenson blamed vaccines for causing severe illnesses and has appeared on several Fox News shows where he downplayed vaccines.

Berenson’s tweets were shared a handful of times in the chat in January and June. In January, a HART member shared a tweet from Berenson where he was comparing deaths post-COVID vaccine and deaths related to the flu vaccine. “But remember about 14x as many flu shots have been given…” Berenson wrote, saying dying from the COVID vaccine was 120 times more likely than from a flu shot.

While HART had constantly stated that the narrative around COVID-19 is full of misinformation and hysteria, it seems that the group might be as susceptible to it as the public they readily decry.