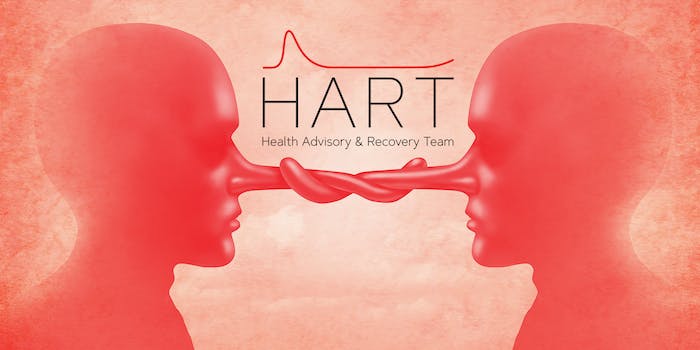 Leaked chat logs reveal how the former lead psychologist for Cambridge Analytica has been working behind the scenes with a notorious anti-vaccine group in the U.K.

The chat records, provided to the Daily Dot by the activist collective DDoSecrets, detail efforts by HART (Health Advisory and Recovery Team), a self-described “group of highly qualified UK doctors, scientists, economists, psychologists and other academic experts,” to influence politicians on issues related to COVID-19.

The leak, as first reported by Logically on Tuesday, involves tens of thousands of chat messages stretching back to January before the group’s official launch. Held over the messaging platform Rocket.Chat, the communications highlight a stark contrast between HART’s public attempts to portray itself professionally and some of its members’ conspiratorial views.

HART’s official website currently lists more than 40 members. Yet some of the most influential and active participants in HART’s chats are not publicly acknowledged by the group. The leaked messages also show how HART sought to conceal the involvement of those who might be deemed controversial.

Since the beginning of the chats, Patrick Fagan—who is not acknowledged on the website as part of HART—has had a role in shaping HART’s messaging. A behavioral scientist whose work utilizes psychology to influence people’s actions, Fagan is currently the chief scientific officer at the behavioral science consultancy group Capuchin. The company relies on “psychometrics, implicit testing, eye-tracking, facial coding, EEG” and other methods to increase revenue streams for businesses.

In a manifesto shared with the group in early January, Fagan argues that behavioral science has an ethics problem: “I should know: I was formerly the Lead Psychologist at Cambridge Analytica, and I’ve since worked for tobacco companies, gambling sites, and voter deterrence campaigns.”

Fagan’s paper, titled “Pushing Back against the Nudges,” announces the launch of a “Counter-Nudge Unit” designed to push back on government messaging regarding the pandemic.

“For the uninitiated, nudging is the idea of using psychological principles to give people a gentle bump in the right direction, rather than forcing compliance,” Fagan writes.

The leaked messages appear to indicate that several chat rooms were set up in the wake of Fagan’s paper with names such as “Nudge” and “Psych ops.” The Nudge room, according to screenshots of its description, involves “strategy materials to effect change in public beliefs / behaviour.”

The “Psych ops” channel seems to have later been changed to “persuasion” after members expressed concerns that the group would look hypocritical if it appeared to be “using covert strategies which we have critiqued the ‘other side’ for.”

A second user concurred, noting the potential fallout that could ensue if a leak exposed the channel’s name.

“I would agree,” the user said. “Especially just in case of leak/hack, and maybe merge ‘nudge’ with this channel e.g. delete that and put everything in here?”

Further into his manifesto, Fagan goes on to make a link between policies regarding face masks and citizens being forced into internment camps.

A highly sanitized version of Fagan’s paper was published months later in the British magazine the Critic, which did not include his comments linking face masks to internment camps or mention his previous work in voter deterrence or the tobacco and gambling industries.

Aside from his own documents, Fagan also shared a file from the Department of Homeland Security (DHS) regarding “mass psychogenic illness,” a phenomenon that occurs when a group of people simultaneously feel sick despite no infectious agent being present.

Asterisks were placed by Fagan around a specific passage in the document detailing how a chemical, biological, or radiological attack could produce more cases of psychogenic illness than actual casualties. Given the HART group’s focus on COVID-19, the insinuation is clear.

“In the eyes of the sleeping public we would basically be seen as child murderers,” Fagan wrote.

Fagan and Capuchin did not respond to inquires from the Daily Dot regarding his work with HART.

Some of HART’s members were seemingly aware that espousing conspiratorial beliefs could hamper the group’s public image. One member who had drafted a letter to University of Edinburgh public health professor Devi Sridhar had asked the group to provide feedback. The letter accused Sridhar of “promoting propaganda on vaccines to innocent children” and therefore “taking part in a genocide program.”

One of HART’s co-chairs responded to the draft by calling for the removal of numerous sentences including those espousing conspiracy theories about billionaire Bill Gates. The letter’s original author appeared uninterested in removing the outlandish language.

Other conspiracy theories discussed in the chats include the QAnon-adjacent belief that the world’s medical professionals will soon face trial at Nuremberg for “crimes against humanity.” The theory of “magnetism,” the false belief that peoples’ bodies become magnetized after receiving the COVID vaccine, was also given its own chat room but gained little traction.

Misguided conspiracy theories seem to have infected HART almost everywhere. One of the group’s acknowledged members, a pathologist, “called on the group to ‘seed the thought that vaccines cause COVID,’” a notion that has no basis in science.

“I think we need to seed the thought that vaccines cause COVID…” she wrote.

HART has not responded to requests for comment from the Daily Dot. In a statement to Logically, the organization did not call into question the veracity of the conversations.

“We are grateful to Logically reporter Ernie Piper for bringing to our attention that an individual has shared private archives and group chats in which HART members believed they were debating, in confidence, their wide-ranging perspectives and hypotheses on the scientific advice informing the Government’s pandemic policies, as well as informing HART’s strategy.”