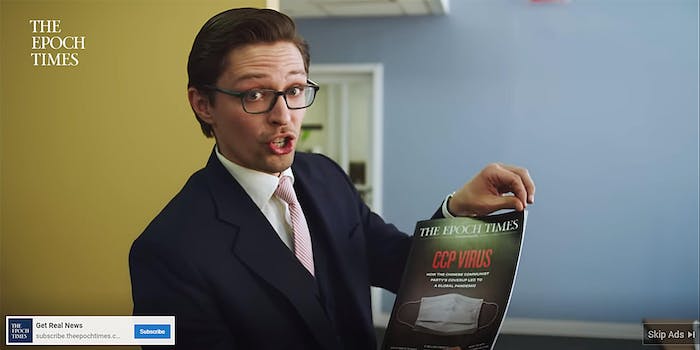 YouTube removed all its coronavirus ads in response to the Daily Dot inquiry.

If you’ve been on YouTube recently, you’ve probably seen advertisements for the Epoch Times.

On the surface, the ads aren’t particularly remarkable. In them, fresh-faced young professionals speak in dull, robotic monotones, often in an imaginary American home that’s bright, spic-and-span, and devoid of character. Most viewers just tune it out until they can skip it.

Spend any amount of time on YouTube and Epoch Times ads will leach into your brain like an earworm. You may find yourself cringing when the 30ish everyman who stars in many snaps his fingers and says yet again, “And take a look at this.”

The “this” he speaks of is almost invariably anti-China. In fact, most of the ads are about China, specifically the Chinese Communist Party, which may seem odd for a publication that describes itself as “pure American journalism that’s based in traditional values.”

Until this week, most of the Epoch Times ads were specifically about coronavirus. Many contained disinformation about the virus that Epoch Times dubbed the “Chinese Community Party virus,” or CCP virus. “The countries that have been hardest hit by the virus have the deepest ties to the communist party,” said one, falsely.

After the Daily Dot inquired about whether the ads violated YouTube’s policies, the company removed all Epoch Times’ ads related to the virus. A YouTube spokesperson also said that it had temporarily banned most advertisers from mentioning the virus in ads.

Others have complained about Epoch Times’ coronavirus ads in the past. An April 25 complaint on the company’s support page asked, “Why are you allowing ‘Epoch Times‘ to spread Alex Jones level conspiracy theories about COVID-19??!?”

But it’s not just YouTube; Epoch Times is all over the web. It presents itself as a new conservative publication, little different than the Breitbarts and Daily Wires of the world. But the more you look, the less that image holds up.

Since its founding by members of Falun Gong, a Chinese religious practice many liken to a cult, Epoch Times has yolked itself to the far-right, which aligns with its anti-Chinese government credo. By pouring millions into its digital presence—including ads supporting the president—pushing conspiracy theories, and employing what’s been described as “dubious growth tactics,” the Epoch Times has become a conservative media powerhouse.

The coronavirus pandemic has presented Epoch Times with a golden opportunity to exploit anti-Chinese sentiment. Over the last several months, it’s been cranking out videos, ads, and articles blaming China for the pandemic.

Many of Epoch Times’ ads and videos begin with an allegation that’s arguably true, such as that China initially tried to cover up the virus. They’ll then pivot to wild, unsupported claims.

Observers have pointed out that it’s relying on the time-tested propaganda tactic of mixing facts with fiction.

“The most effective disinformation is that which has a kernel of truth to it, is that which kind of flies under the radar, doesn’t really break any guidelines,” Claire Wardle of First Draft, which educates about misinformation and how to spot it, told Canada-based CBC last month.

One video takes the tragic, and widely accepted, fact that the Chinese government forcibly harvested organs from imprisoned Falun Gong practitioners and stretches it into an outlandish claim that Spain’s organ transplant community not only helped cover this up but has been more affected by the pandemic because of it.

(Spain actually outlawed its citizens traveling to China for organ transplants based on the allegations of forcible organ harvesting. The reasons for Spain’s high numbers of coronavirus infections and deaths are myriad, but do not include covering up organ harvesting.)

“Spanish organ transplant community helping the CCP avoiding international accusations of live organ harvesting is the main cause of the pandemic within the country,” the video says, nevertheless.

“…The outbreak of the CCP virus in countries like Spain is God’s punishment and warning to those who ignore the persecutors of human rights in the Chinese Communist Party.”

The same video alleges that countries that joined the Belt and Road Initiative, an ambitious international infrastructure project spearheaded by China, are more impacted by the virus. There’s no logical causality between supporting a project and increased coronavirus infections and deaths.

Peeling back the facade

Epoch Times and its sister publication, a digital production company called New Tang Dynasty Television (NTD), operate under the umbrella of the nonprofit Epoch Media Group. On its 2017 Form 990, the group says its mission is “Chinese cultural exchange.”

Its mission is more accurately described as undermining the Chinese government. In recent years, that has increasingly involved propping up far-right causes and candidates on a global scale. As of 2010, it printed in 33 countries and 17 languages, per Politico.

“Epoch Times is well known in some parts of the world as a proponent of bizarre and extreme views, misinformation and support for the far right,” New Statesman recently wrote in a piece about Epoch Times’ effort to make inroads in the United Kingdom.

Domestically, Epoch Times is an ardent supporter—financially and editorially—of President Donald Trump. True to form, Trump world has embraced Epoch Times right back. The president’s Facebook page has shared its content numerous times, and last year the president’s daughter-in-law Lara Trump gave one of its senior editors a 40-minute interview in Trump Tower. At the Conservative Political Action Conference (CPAC) in recent years, it has interviewed members of Congress, celebrities, and other conservative stars.

In August, NBC News reported that in a six-month time period, Epoch Times had spent $1.5 million on roughly 11,000 Facebook ads supporting Trump, outranking every other entity except the campaign itself.

Facebook reacted by banning it from buying ads on the grounds that it violated political transparency rules. It also shuttered 600 pages it said were linked to the publication. Facebook has also flagged some content produced under the Epoch Media Group umbrella.

Demonstrating the breadth of Epoch Times’ influence, Trump ally Rep. Jim Banks (R-Ind.) reacted to the Facebook advertising ban by sending Mark Zuckerberg a letter accusing the company of becoming a tool of the Chinese government.

“By prohibiting Epoch Times from advertising, you have indirectly aided the Chinese Communist Party in their worldwide soft power competition with the United States—using the same censorship tactics as Xi Jinping,” Banks wrote.

Undaunted, Epoch Times turned to YouTube, where its advertising has become legion. In February, the New York Times reported that it had spent $1 million on YouTube ads; one expert estimated that Epoch Times was spending more than “household names like the New York Times, CNN, Fox News, and the Wall Street Journal.”

Its origin story and tactics cast this newfound influence and spending in a bizarre, alarming light.

The Epoch Times was founded by followers of Falun Gong, which began in China in the early 1990s. To the faithful, Falun Gong is a religious practice that combines meditation and exercises with teachings on truth, benevolence, and forbearance. To many, including its home country, it’s a cult. China banned the practice in 1999.

Over the last two decades, its followers have gotten into the propaganda-as-news game big time. Founded in 2000, the outlet was little known outside its core readership until 2016, when it exploded into the public consciousness, earning ardent fans and equally vociferous detractors.

“Blatant propaganda,” “patently false,” “conspiracy theories,” and “extreme Cold War propaganda” are just some of the complaints about it. Alongside these, you’ll find people describing it as “honest,” “edifying,” “great content,” and the like.

In the early years, its content was created by Falun Gong practitioners who volunteered their time as part of their spiritual quest. According to NBC News, for the first time in 2016 the publication hired outside reporters and tasked them with churning out stories. A former employee likened it to a Russian troll farm.

“It’s like we were supposed to be fighting so-called liberal propaganda by making our own,” he told NBC.

Their content appeals to particular groups. The ecosystem of Epoch Times publications has zeroed in on older conservatives and the conspiracy-minded who distrust mainstream media.

A recent ad touts that Epoch Times has increased the font on its print publication by 20%. Another features two presumed millennials talking about buying their parents subscriptions. NTD produces videos about topics like the Wall Street coronavirus connection and China’s secret plan to destroy America. NDT-produced Edge of Wonder videos delve into topics like whether the moon landing was faked, the deep state, and it has an entire playlist dedicated to QAnon.

YouTube did not remove any of the videos the Daily Dot flagged for potential policy violations. It did, however, say it was reviewing Epoch Times’ and NTD’s channels for compliance. The spokesperson noted that Edge of Wonder had already been suspended from monetization. To date all three are still using the platform to spread conspiracy theories and disinformation.

The new tactics have been wildly successful.

Epoch Times also has a print publication that sells alongside local and national newspapers in stores across the country.

Recently people in the U.S. and Canada were surprised to find sample copies in their mailboxes that specifically blamed China for the coronavirus.

A Canadian mail carrier told CBC, “To be honest, it makes me feel like … humanity is facing an existential crisis. And I’m being forced to hand out weapons in a cage fight.”

Some Epoch Media Group-created content is legitimate and verifiable, particularly that of Epoch Times. But scratch just beneath the surface and you’ll find some truly bizarre and patently false claims.

By playing into people’s predilections—such as the anger toward China over coronavirus—and hitching onto the miasma comprising the far-right, older people, conspiracy theorists, and Trump, Epoch Media Group publications have hit on a winning strategy.

“Their end goal—the spiritual group—is to bring about a judgment day that will pit communists, send communists to hell, and anyone who’s sympathetic to them to heaven,” said MSNBC’s Ali Veshi.

“And they think that Donald Trump is the guy helping bring that about.”