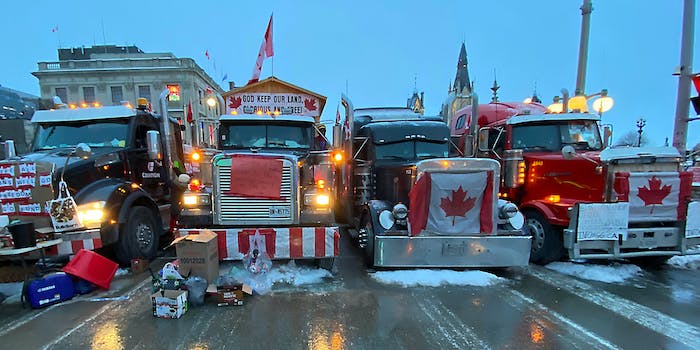 Founder for ‘Adopt a Trucker’ campaign has emails leaked by hacker

A hacker was able to access the ProtonMail inbox of Chris Garrah.

A hacker leaked emails from the inbox of Chris Garrah, the founder of the pro-Freedom Convoy fundraiser known online as “Adopt a Trucker.”

The data cache, which contains roughly 250MB of emails and attachments from Garrah’s ProtonMail account, was provided to the journalism and transparency collective DDoSecrets on Monday.

The emails span from Feb. 7 to the morning of Feb. 21 and provide insights into the controversial campaign.

DDoSecrets, which says it will only be giving journalists and researchers access to the data given its sensitive nature, urged those reviewing the emails to be cautious given the potential for malware.

“The source noted that while they were able to remove some malware from the original inbox, it is possible that some was missed. Therefore, they recommend that the files be sandboxed and scanned with the appropriate antivirus software,” DDoSecrets wrote.

In a statement to the Daily Dot, Garrah said that he believed his other online accounts such as his Facebook page had been hacked as well.

“Not much of an email person or computer person but I’ve been told all my accounts and all that stuff has been hacked and so I don’t know what to do about it,” Garrah wrote. “Just going to leave it for now, I don’t really care, even my Facebook account. A lot of evil people out there, not going to waste my energy on them.”

Analysis of the leak by the Daily Dot showed numerous emails Garrah received regarding payouts from the campaign, several of which were in the tens of thousands of dollars. The fundraiser was hosted on the Christian website GiveSendGo which was also hacked earlier this month.

Stripe, the company that was handling the campaign’s payment processing services, eventually stopped allowing Garrah to transfer donations to his bank account.

“Hi, Pursuant to the Order from the Ontario Superior Court of Justice and consistent with Canadian bank partner requirements, we are pausing charges and pay-outs for the Canadian Adopt-A-Trucker campaign,” Stripe told Garrah in an email last week.

In an attempt to have his account reinstated, Garrah argued that his campaign was similar to the humanitarian efforts of the Red Cross.

Other emails, as noted by Belingcat researcher Aric Toler, accused Garrah of “ducking out” and abandoning the convoy after he allegedly stopped providing donors with updates.

Emma Best, the co-founder of DDoSecrets, told the Daily Dot that the leak sheds new light on the inner workings of the Freedom Convoy movement.

“This new release offers an inside look at one of the organizers for Adopt A Trucker and the general Freedom Convoy movement, their struggle for funding after Stripe cut them off, and their self-comparisons to the Red Cross when they tried to get their accounts restored, as well as the reaction of the supporters and their feelings of abandonment,” Best said.

The movement, which began in protest of vaccine mandates and other public health measures, is now facing a growing crackdown by law enforcement. Supporters in the states are now attempting to plan for a similar protest in Washington, D.C.