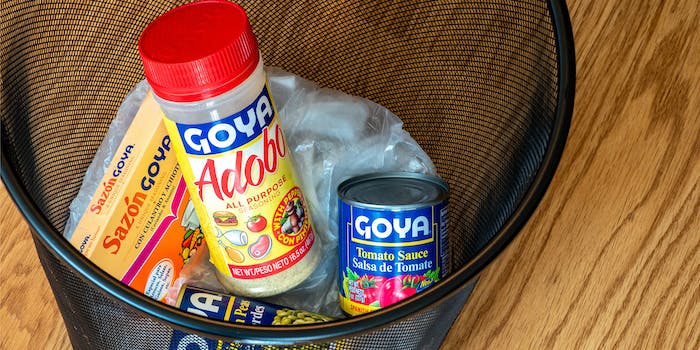 A Daily Wire story contends that Goya Foods named Ocasio-Cortez its “Employee of the Month” after her role in a July controversy after President and CEO Robert Unanue spoke at a White House event. At that event, Unanue remarked, “We’re all truly blessed at the same time to have a leader like President Trump, who is a builder.”

Ocasio-Cortez did share coverage of the event, though, via a tweet from author Igor Volsky suggesting a boycott based on the Unanue appearance with Trump. AOC retweeted that call, adding, “Oh look, it’s the sound of me Googling ‘how to make your own Adobo.'” (She went on to share an Adobo recipe on Twitter from a friend, just a few hours after her original tweet.)

The story, which depicts AOC as “echo[ing] a call for a boycott of Goya products,” pulls from an interview Unanue did earlier on Monday with Houston-based radio talk show host Michael Berry.

“We still have to chat with AOC; I love her,” Unanue said in the interview. “She was actually our Employee of the Month; I don’t know if you know about this, but when she boycotted us, our sales actually increased 1,000%. So we gave her an honorary—we never were able to hand it to her but she got Employee of the Month for bringing attention to Goya and our adobo. Actually our sales of adobo did very well after she said ‘Make your own Adobo.’”

Some showed their support for Goya and for the award, including author and conservative pundit Candace Owens.

Countering that view, author and personal finance coach Lynnette KhalfaniCox weighed in while dismissing the “owning the libs” energy.

And others had their own theories on why Goya sales might have spiked as Unanue claimed. One opined, sarcastically, that it “had nothing to do with the fact that restaurants were shut down and people were cooking at home and spending a lot more money at the grocery store. But go ahead and give @AOC some free publicity.”

And finally, there was a corner of Twitter who saw Goya trending and hoped “it’s about the painter and not some fuckin beans.”

As it was in July, it is definitely and sadly not about the painter.

(As of press time Monday evening, Ocasio-Cortez had not weighed in about her “award” on the platform.)