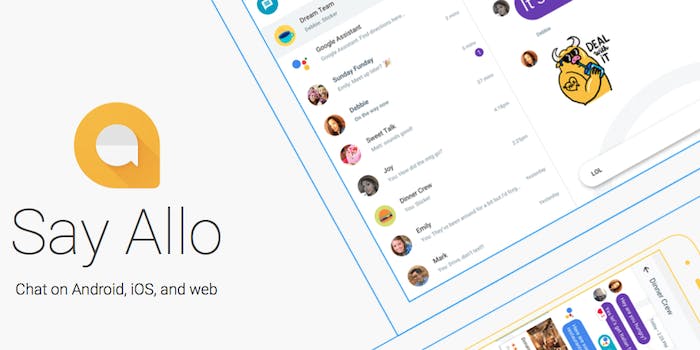 Google finally has an iMessage alternative—kind of

Google has quietly been working on a game-changer.

Google has tried its hand at the messaging app game numerous times over the years. It’s debuted Gchat, Hangouts, and most recently Allo, but none have managed to reach the same magnitude of success as Apple’s messaging solution, iMessage. That may change, however. Google is reportedly working on a new messaging endeavor, simply called Chat.

Chat is built around a standard called the “Universal Profile for Rich Communication Services,” RCS for short. It’s a technology that could replace SMS, according to the Verge. It’s not a new app, per se, but will be built inside Android Messages. Chat will be carrier-based, rather than OS-based, and will include support for standard features such as group messages, read receipts, and full-res photo and videos.

Like SMS, it won’t be encrypted end-to-end, however—so it’s not a complete iMessage alternative. However, like iMessage, messages are sent over your data network rather than your SMS plan. If you message someone who doesn’t yet have Chat on their handset, the message will revert to SMS, though.

Chat will be enabled in the not-too-distant future on a carrier-by-carrier basis.

You may be wondering: What about Allo? Two years ago Google introduced what it thought would be the answer to its messaging woes: a new app called Allo. Unfortunately, it landed with a thud: It “totally sucks, and there’s virtually no reason to even consider using it,” Mike Wehner wrote in the Daily Dot’s review of the service. Now, Google is reportedly “pausing” development on this app, and instead focusing on Android Messages, which will become the default messaging app on most Android phones in the future. (It will be the default for basically all Android phones save Samsung handsets and phones used in China.) Previous Allo-centric features such as GIF-searching and Google Assistant will get rolled into Android Messages.

Google is continuing with several of its other messaging entities though. Duo, its video chatting app,  is “surprisingly successful,” according to the Verge. It will continue on its merry way. And Hangouts is evolving into an enterprise-focused Slack competitor called Hangouts Chat.

According to Anil Sabharwal, the Google executive now in charge of its messaging efforts, “Our goal is to get this level of quality messaging to our users on Android within the next couple of years.”

Google’s annual developer conference, Google I/O, will kick off in just a few short weeks, on May 8. There, we’ll likely hear a whole lot more about Chat and the new Android Messages.