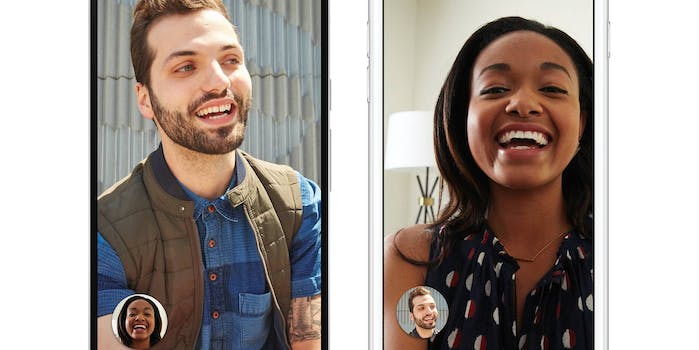 Anything that could be even mildly complex has been stripped out of Duo. It’s mobile only—there is no desktop app or web version—and operates on both iOS and Android.

Rather than requiring users to sign up for, or sign in to, a Google account, the app requires just a phone number to operate. To create an account, it checks the phone number from a device’s SIM and then sends a confirmation text to that number. That’s all there is to the set-up process.

Likewise, the chat itself is stripped down to its simplest form. There is no group chat option, no add-ons or visual effects or filters like Google Hangouts. It’s just a simple, straight-forward stream between two people.

The purpose of clearing out the clutter and keeping Duo as simple as possible is to achieve something that most video chat apps fail at: maintaining a reliable connection. According to Google, Duo is designed to make its end-to-end encrypted video calls “fast and reliable” even on slower networks.

Call quality will adjust dynamically based on network conditions to keep the conversation going. When bandwidth is limited, Duo reduces the resolution of the call to a level that will allow it to continue. The app can also switch between Wi-Fi and cellular data effortlessly without dropping a call.

While most of Duo is about perfecting the parts of video calling that other apps have trouble with, it does introduce one new feature to the mix: Knock Knock. Currently only available to Android users, Knock Knock shows live video from the caller. Since the video is already being broadcast, calls start the second the other person answers with little to no delay.

Knock Knock only works with numbers already saved as contacts, so there won’t be any unpleasant surprises from unexpected video callers. And users aren’t stuck with using Knock Knock if they don’t want; it can be disabled completely.

Duo is the first of the two new communications apps Google unveiled at this year’s Google I/O to find its way to the public. Allo, the message app powered by artificial intelligence, has yet to be given a release date.

Neither Duo or Allo are designed to replace Google Hangouts, the company’s existing text and video communication app. Hangouts, which has been downloaded over 1 billion times on Android devices, will continue to exist but will become more focused on enterprise users.

Google has already started to roll out Duo for Android and iOS, and the app will be available worldwide over the course of the next few days.