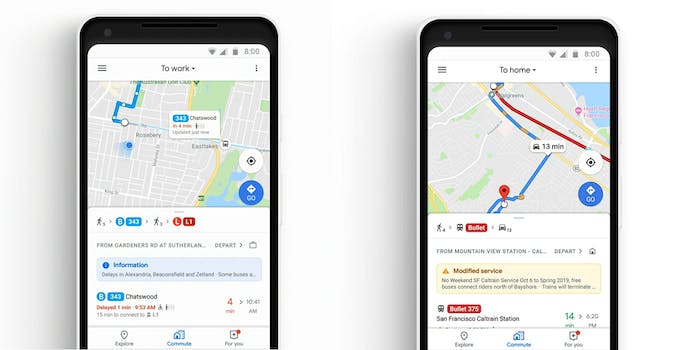 You can stop and start music in the app too.

Good news for commuters around the world: Google is about to make your subway ride a lot easier. Starting today, Google Maps will give you real-time visual displays that show you where your train, subway, or bus is at any given time.

Google on Monday launched the “commute” tab, which provides detailed information on traffic and delays to help users get from home to work, work to home, or anywhere in between. While the tab relies on the same route estimation technology that’s already powered Google Maps, the tab combines walking, driving, and train times together and helps users calculate how early they’ll need to leave their house catch their train or drive to a bus stop. The app even calculates how long it will take commuters to walk from their subway stop to their office.

The commute tab also comes with real-time visual information on buses, trains, and subway arrivals. Eighty regions worldwide will see where their bus, train, or subway is on the map, which means there’s no need to check Google Maps’ arrival times and guess whether your subway is stuck on the other side of town or barreling toward your stop. Transport New South Wales is also working with Google to let users in Sydney, Australia know whether their next bus or train is packed, and the company says the feature “will be coming to more cities around the globe soon.”

Alongside the commute tab, Google is also introducing integration for Spotify, Apple Music, and Google Play Music via Google Maps. Users can pause tracks and skip songs without leaving the app, and Spotify users on Android can also browse for new tracks or podcasts. Google says the commuter features will “start rolling out globally on Android and iOS this week.” Head on over to the iOS App Store or Google Play Store to see if your region is ready for an update.