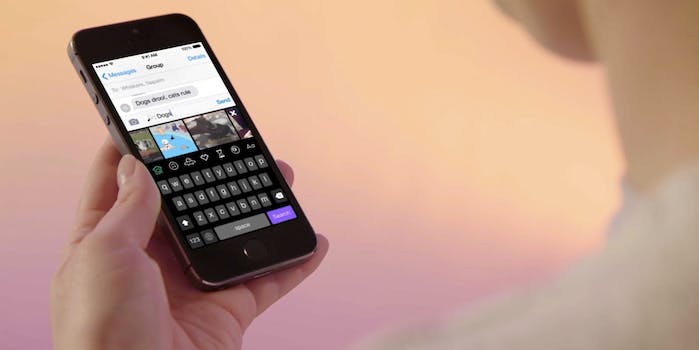 You don't have to toggle between text and GIFs.

It was only a matter of time before GIPHY debuted its own keyboard to pop GIFs into conversations everywhere.

GIPHY Keys, which debuted on Tuesday, is a slick keyboard for iOS that makes it possible to share GIFs in your messages and posts on any app you use. GIPHY is already responsible for powering GIF-sharing on Twitter, Tinder, and Slack, and now the company’s keyboard extends to any app.

The keyboard puts the full GIPHY library in your iOS keyboard, letting you browse for GIFs based on topics, movies, memes, or feelings, or use special integrations like the “#echo” function to turn your texts into GIFs instead.

You can save your GIFs to the keyboard so you can come back to them later. The app also features some random commands—like “#8ball,” which lets you ask a question and gives you an answer via GIF, and “#weather,” which will show you the weather in your current zip code as a custom GIF.

“As Apple opens up third-party keyboard space and they continue to make that more mature, there’s going to be a lot more opportunity on our end to build in that real estate some really interesting things,” Julie Logan, head of brand strategy at GIPHY, said in an interview.

To use GIPHY Keys, download the app and add it to your “Keyboards” under General Settings. The app walks you through this process when you download it, and once installed, it’ll show up just like your default and emoji keyboards.

You can use GIPHY Keys to search for GIFs from your keyboard. When you find the one you want to send, copy it with a tap, then paste it into whatever text field you’re using. It’s pretty seamless across apps like Messages, Twitter, and Snapchat, but on Facebook, you’ll have to paste the link instead, which you can copy by pressing and holding the image and tapping the “Facebook” button.

If you haven’t used a GIF keyboard app before, it takes a little getting used to; copying and pasting isn’t necessarily intuitive. But after playing around with it a bit, I can’t imagine not having a GIF keyboard that lets me easily send reaction GIFs to people.

The copy and paste functionality is a constraint within iOS that engineers had to work with, Jillian Fisher, head of mobile products at GIPHY, said in an interview. The GIPHY team had to figure out how to support the different ways that platforms share GIFs (like adding a Facebook share button to copy the link instead of copying and pasting an image directly into the text box).

There are already GIF keyboards for iOS and Android, including some that use GIPHY’s API to serve up GIFs. The difference with GIPHY Keys is that the layout isn’t exclusively GIFs; you don’t have to jump back and forth between keyboards when you want to type text or share an image. The customizable GIFs and saved history also make it a more functional keyboard than the ones that are already available.

Logan said that GIPHY has no plans to cut off support for those other keyboard GIF apps: “We’re not a GIF keyboard company.”

GIPHY Keys is only available on iOS for now, and the company didn’t say when the app will be available for Android.