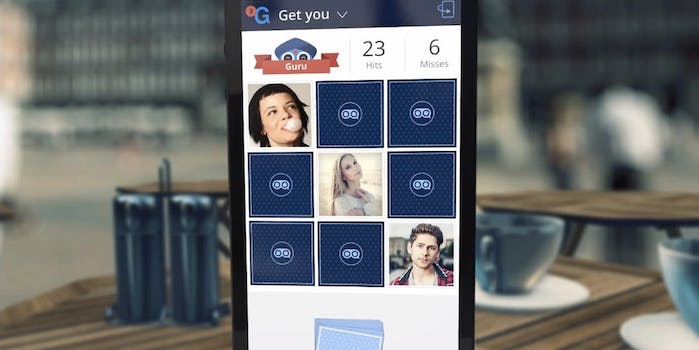 GetYou, the latest lighthearted app to get the million-dollar treatment, lets you see how people, well, “get” you. Like a dating app, users evaluate one another based on a public profile, but this app turns that sometimes painful process into a low-stakes card game. The novel idea caught the eye of venture capital firm RDSeed, who contributed most of the $1.1 million in seed funding, along with a couple angel investors.

To play GetYou, which is available for iOS and Android, you must set up a profile with your Facebook account. You’ll be asked to answer a couple quick questions about yourself: your jobs, your hobbies, your interests, and your relationship status, of course. Then comes the fun part: You pick six “cards”—other users’ profiles—and answer questions about the people who pop up, things like, “How old is he?” or “Where is she from?” Then you’ll receive a score based on the accuracy of your replies.

Meanwhile, on your own profile, you’ll be able to see what people think about you. At any point in the game, users can decide to “friend” one another.

Like Yo, GetYou is of dubious value, and it’s got a lot of trolling potential. Imagine being told your profile photo makes you look like you’re a 50-year-old divorcée by a not-so-nice GetYou user, when you’re really 25 and single. But then again, non-trolls might just find love, or at least a new friend.

Plus, with enough ratings from other users, you may be able to get a real sense of how strangers perceive your online persona—something that’s useful to keep in mind whether you’re setting up a LinkedIn profile to make professional connections or a Tinder profile to find The One.

TechCrunch and VentureBeat have both speculated that GetYou will eventually monetize by playing up the dating app aspect, provided it can scale up and rope in enough users.