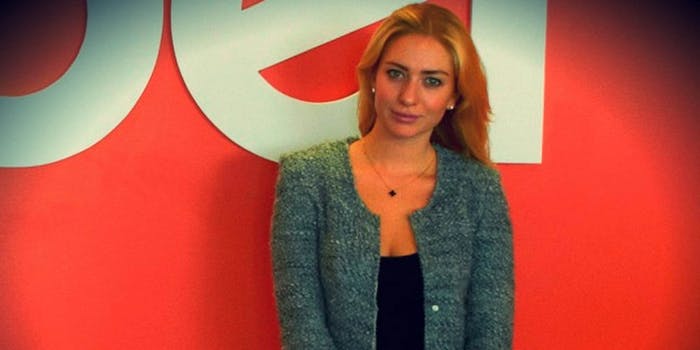 Whitney Wolfe says she was harassed and forced out of the company.

According to TMZ, Whitney Wolfe has filed a lawsuit against her former colleagues at Tinder for sexual harassment. Wolfe claims she was a an upper-level executive (her Twitter bio says she’s a cofounder at Tinder and VP of marketing) and that the other male executives wanted to remove her high standing in the company because a 24-year-old woman at the helm would hurt the app’s credability.

Wolfe also alleges that “one of the execs made a romantic play for her and she eventually dated him.” Once it ended, she claims he harassed her and “called her a whore in front of the CEO.” She says she was fired in “retaliation.”

Wolfe also claims the harassment continued via texting, where the executive also allegedly made racist comments after discovering she was talking to Muslim men. According to the report, the unnamed Tinder executive texted Wolfe: “You prefer to social climb middle-aged Muslim pigs that stand for nothing.”

Contemporary app Snapchat‘s reputation recently took a hit after CEO Evan Spiegal’s college emails were released, many of which were sexist and inflammatory. Now Tinder will find itself on the defensive, although if the accusations are true, Tinder doesn’t have the “I was in a frat! It was during college!” excuse to try and fall back on. For the moment, however, Tinder hasn’t responded to the lawsuit, and Wolfe’s claims remain just that.

Wolfe has been called the “woman behind Tinder,” doing promotional interviews with women’s publications like Harpers, Elle, and Marie Clarie to plug the app. In an interview with Marie Claire last November, Wolfe explained why she finds the app empowering: “Tinder is the perfect place for females. In real life, women are constantly being approached and bombarded. On Tinder, no one can approach you unless you give them the green light to do so.”

Tinder has not returned my request for comment. This article will be updated as the story develops.

UPDATE:  An IAC (Tinder’s parent company) spokesperson sent me the following statement regarding the lawsuit:

Immediately upon receipt of the allegations contained in Ms. Wolfe’s complaint, Mr. Mateen was suspended pending an ongoing internal investigation.  Through that process, it has become clear that Mr. Mateen sent private messages to Ms. Wolfe containing inappropriate content.  We unequivocally condemn these messages, but believe that Ms. Wolfe’s allegations with respect to Tinder and its management are unfounded.