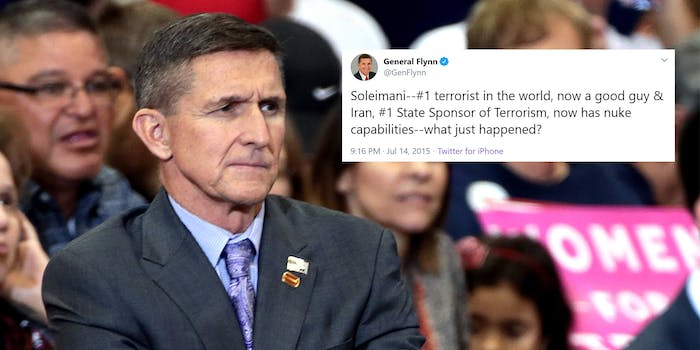 He was not arrested because he 'dared question' the Obama administration.

In 2017, retired Army lieutenant general Michael Flynn pled guilty to one count of making false statements to the FBI.

Prosecutors recommended no jail time in exchange for his cooperation with the Robert Mueller-Russia investigation. Flynn also admitted to lying to agents about his contacts with the Russian ambassador—basically the very reason he was fired by President Donald Trump just 23 days into his tenure as national security adviser —and other diplomats.

But is it possible he was targeted by the deep state because he was in favor of war with Iran?

Far-right conspiracy site the Gateway Pundit is using the U.S. conflict with Iran, which is rapidly escalating, to push a conspiracy theory that Flynn was set up by the so-called deep state. An article on the site claims that one of the reasons Flynn was “targeted for ruin” was his July 2015 tweet criticizing the Iran nuclear deal.

In the Gateway Pundit article, Cristina Laila argues that because “Flynn dared question the criminal and corrupt terrorist-appeasing Obama Administration,” he was targeted for prosecution nearly a year into Trump’s presidency.

In reality, the Obama administration discouraged Israel from assassinating Soleimani because of the potential it would lead to an unpredictable escalation, which was the same reason the Bush administration decided against killing him in 2007, the Daily Beast reports.

Laila also incorrectly refers to the DOJ investigation of Flynn as “spying” on him, incorrectly implies that it had an obligation to inform him that he was the subject of an investigation, and falsely claims that “this is more evidence of [Andrew] Weissman-[Robert] Mueller criminal activity.”

The DOJ is tasked with investigating people for crimes, and is under no obligation to inform them of such.

After Laila dug up Flynn’s five-year-old tweet in recent days, her fans, including among them many QAnon followers, piled on support for Flynn in the comments. The conspiracy theories and misinformation are thick in the revived thread.

This tweet is one of the reasons why the criminal deep state targeting you, General Flynn. #PardonGeneralFlynn

He can’t pardon Flynn without a trial or verdict.

In the last year, Flynn has seemingly backtracked on his guilty plea and admissions of dishonesty, prompting Department of Justice prosecutors to recommend jail time just this Tuesday, saying that he “has sought to blame almost every other person and entity involved in his case,” Politico reports.

Flynn’s sentencing hearing is set for Jan. 28. Politico reports that if Flynn proclaims he is innocent of the charges he pleaded guilty to, it is possible that the judge in his case will throw out the guilty plea, which could result in him being criminally tried.