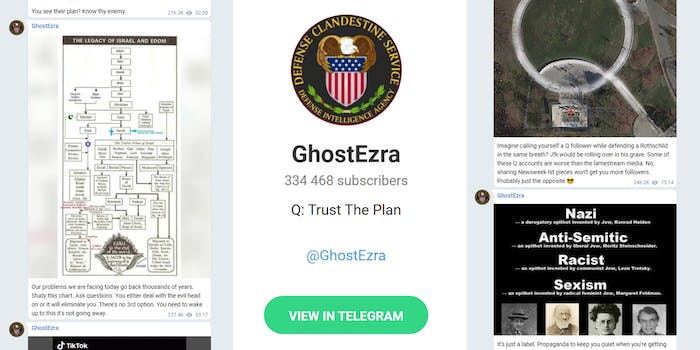 Could GhostEzra take QAnon to an even more disturbing level?

Are they here to save the movement? Or destroy it?

In the earliest days of Christianity, disciples of the teachings of Jesus spent as much time arguing with each other as they did preaching. Those first few centuries are full of recorded and theorized squabbles over the very basics of doctrine and canon, what was a “real” book of the Bible as opposed to an apocryphal one, and what the tenets of their growing religion should look like. As one scholar put it to PBS’ Frontline “from the very beginning, it seems Christianity has different ways of construing what it’s all about, which will lead to divisions and lead to conflict.”

Jump ahead about two millennia and the same internal squabbling and division now plagues the QAnon movement, composed of disciples of a mysterious oracle claiming to reveal hidden truths that are embraced with a similar religious fervor. Disciples and promoters have feuded for years over who is a real follower, who is merely in it for the money, who is a controlled opposition shill for the cabal, and increasingly, who will be the dominant voice of those who follow the unknown avatar who goes by Q.

Of course, Christianity eventually found its way to being a religion that billions of people have found comfort and direction in, as opposed to a conspiracy theory that resembles a cult. But millions of people do believe in Q—and many more likely believe in some aspect of it without identifying as “those crazy people.” Looking at which promoters are arguing and why reveals the Q movement’s overall lack of direction, as it stumbles from failed prophecy to failed prophecy, from great hope to great hope, desperate for leadership as the months without a new drop from Q tick by and the movement places more and more false hope in Donald Trump being restored to office.

While the feuding seems like the same impenetrable infighting that plagues many other fringe groups, at stake is who gets to be the most dominant voice in a well-known and influential movement. QAnon tenets are now completely entangled with mainstream Republican orthodoxy. Meaning, whoever is able to take control of QAnon and guide it in new directions could end up with enormous sway over American politics, along with outsized media coverage—and full control over its doctrine and canon.

There’s probably no account more central to the current feuding between Q promoters than the mysterious influencer GhostEzra. Since Twitter essentially banned QAnon after the Capitol attack, GhostEzra has emerged on Telegram as a new iteration of influencer, using the secure messaging app not to interact with followers or “research” new theories, but to spew a firehose of conspiracy theories and antisemitic memes. And the account has picked up over 340,000 followers since first launching in January—more than any other Q influencer beyond Trump legal hero Lin Wood. At a time when many major names in the QAnon community have struggled to sustain their reach, GhostEzra is thriving.

GhostEzra completely embraces fringe conspiracy theories. These go beyond the standard QAnon fare, which already believes that Trump is secretly rounding up Democrats and celebrity pedophiles, waging war against the deep state. Conspiracies such as a new election being scheduled for March 2021, executed celebrities being replaced by clones and body doubles, President Joe Biden being played by a body double dubbed “Bidan” because the real Joe Biden died in 2019, the earth being flat, and Ivanka Trump having secretly been executed under the cover of getting her COVID-19 vaccine.

The reasoning? Because of how she phrased her statement about getting “the shot” rather than “the vaccine.” These are the fringe views of a fringe movement, places Q and its major promoters have never seriously dabbled in. Whereas many (but not all) major Q promoters at least attempt to make a distinction between most Jews and the evil Zionist cabalists they claim to be at war with, GhostEzra puts antisemitism at the very front of their feed. At the same time, Q-adjacent politicians like Rep. Marjorie Taylor Greene (R-Ga.) use common anti-Jewish tropes in their daily social media, giving GhostEzra’s worldview a place to comfortably land.

And at a time of rising antisemitism, a major Q promoter pushing the movement in that direction, a movement that steers the Republican party, could have frightening and lasting repercussions.

The GhostEzra account has revealed nothing about themselves, doesn’t make videos or podcasts, and doesn’t appear to be profiting off their constant conspiracy theorizing—a major change from other promoters who freely take money and sell merchandise. And unlike many Q influencers, there’s absolutely no indication who is running the account, with some stories theorizing that they’re linked to former Trump administration official Ezra Cohen-Watnick, himself a figure thought by some believers and anti-Q activists to be the actual Q poster (a charge both Cohen-Watnick and his lawyers have denied.)

Now, GhostEzra’s status as a post-Q influencer has put the account in conflict with a number of other major well-known Q promoters.

The best-known figure on the other side of this argument is probably the well-entrenched Q influencer Jordan Sather. Sather, who began making videos touting “the Storm” and “The Great Awakening” just days after Q’s first drops in October 2017, has called out GhostEzra on Telegram as putting out “bullshit,” and said he’s an “idiot,” “fake news,” a clown, a “dumb shill,” and other epithets alleging that the account is part of the very media cabal they’re fighting against. Sather says Ghost Ezra is tasked with pumping out disinformation to make Q believers look crazy and racist.

Sather has also accused the account of being a rebranded version of Q influencer EyeTheSpy (who Sather regards as a “nasty shill” with a low IQ), and even gotten upset with Gab founder Andrew Torba for sharing GhostEzra Telegram posts, exclaiming “nooooo” in reply to one particularly antisemitic missive on the “Synagogue of Satan.” To him and others who agree, GhostEzra is a LARP, the Q term for something pretending to be real, but is just a live-action role-playing game. In this case, the account is pretending to be a patriot—the biggest sin of all in Q.

Others have joined in, thinking the suddenly popular account is a plant meant to make Q look bad. In one popular Telegram post, Q influencer CJ Truth claimed “the antiQ cabal Twitter accounts and fake news media loves to promote GhostEzra” who “puts truths out there then sprinkles ridiculous outlandish lies with it.” The 220,000-follower account We the Media shared Sather’s accusations that GhostEzra was “injected” into the Q movement to spread fake news. And a number of major figures in the Q world—including familiar names like Praying Medic, X22 Report, QAnon John, and MelQ—shared a May Telegram post calling GhostEzra a “disinformation account” after their recent storm of antisemitic memes was profiled in Newsweek.

It’s not hard to see why GhostEzra has attracted so much scorn. The account regularly shares theories that are too bizarre for even QAnon promoters, along with rabidly antisemitic and transphobic memes. They’re also absolutely convinced that Joe Biden is not only not the real president, but not even a real person. Even though Q explicitly endorses similarly outlandish ideas, such as Ruth Bader Ginsburg being replaced by a body double and deep state figures using Xbox Live to communicate with each other, Q influencers worry that GhostEzra’s antics are what the media is focusing on, not the “truths” told by Q.

GhostEzra has defenders. The highest profile might be Lin Wood, the Trump election lawyer who has carved out a new career as a QAnon guru for his continued claims that Trump was the actual winner of the 2020 election. Wood told his 845,000 subscribers that he enjoys GhostEzra’s channel, and would “return the compliment on his youthful looks,” if he knew what GhostEzra looked like. And their Telegram posts routinely get thousands of comments, most of which laud their commitment to “truth” and “facts.”

And the account itself has hit back at some of the influencers castigating them, calling Neon Revolt a “book seller and stock symbol pusher” and deriding the book he wrote as “The Great Asleepining” for doubting that Trump was a victim of election fraud. GhostEzra generally slams any Q believer who gives up on President Trump sweeping the phony “Bidan” away forever. Beyond their disdain of apostates, GhostEzra has also warned followers to “beware of Paytriots that jump from movement to profit,” while attacking Q influencer X22 Report for “thinking Biden is in the Whitehouse [sic]” and selling cryptocurrency.

Arguments between QAnon promoters are nothing new. Q believers argued with each other about what was going to happen for weeks leading up to the inauguration. And there’s always been infighting in the movement around money, an echo of which is found in GhostEzra slamming Neon Revolt for writing a book. Squabbles over book payments derailed the collective known as WWG1WGA, who wrote the most popular pro-Q book in the movement’s history, and Q themselves warned followers away from promoters who were making money off patriotism.

The schism between the GhostEzra side and the more entrenched Q promoters could be too much for QAnon to handle. Or it could change the movement forever. This is already a movement that’s leaving behind its previous iteration and has even dropped all references to QAnon—a sign of upheaval and lack of identity. A cultic movement can survive the failure of prophecy with a strong leader at the helm. Right now, QAnon has no such leader and is desperate for one. If GhostEzra wants to be the most visible and welcoming QAnon promoter, they have a real chance at taking control of a mass movement.

Where they take it could be more disturbing than the original.