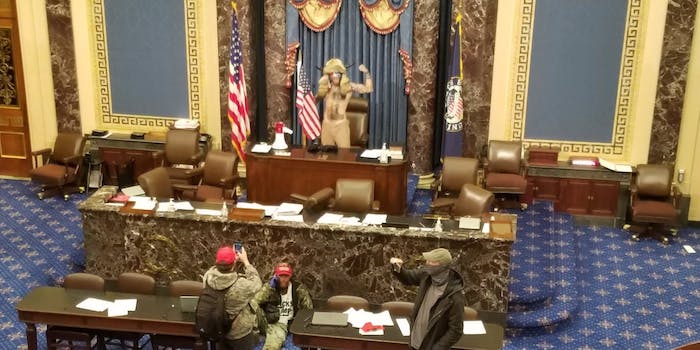 It's a symbol of a movement whose aim has been to destroy American democracy since it began.

As supporters of President Donald Trump stormed the U.S. Capitol today—ending this nation’s boast of two consecutive centuries of a peaceful transition of power—a QAnon supporter stood atop the dais of the House of Representatives, a symbol of a movement that has been at war with American democracy since Trump came to power.

Jake Angeli, known in Q circles as the Shaman for his face paint and furs, was part of the crowd that attempted to seize the U.S Capitol.

Throughout the day numerous Q supporters were spotted in the movement that stormed the U.S. Capitol.

Since the QAnon movement began, supporters of it have believed that President Donald Trump was locked in a secret struggle to arrest powerful Democratic politicians, who they believe are pedophiles and cannibals.

However nonsensical the movement is, it has grown in fervor and intensity as the president has stoked its flame, happy to have a fervent base of diehards believing he is locked in an existential struggle for the soul of the nation.

That movement never accepted Trump’s loss in the 2020 election, believing it to be fraudulent. And because Trump allowed the anger of hundreds of thousands of people in the movement to grow, all bent on overthrowing the U.S. government, this could be seen as a logical conclusion. A deranged man wearing furs and face paint seizing the dais of the U.S. House of Representatives after Trump failed to denounce a massive conspiracy based on a set of virulent lies for years.