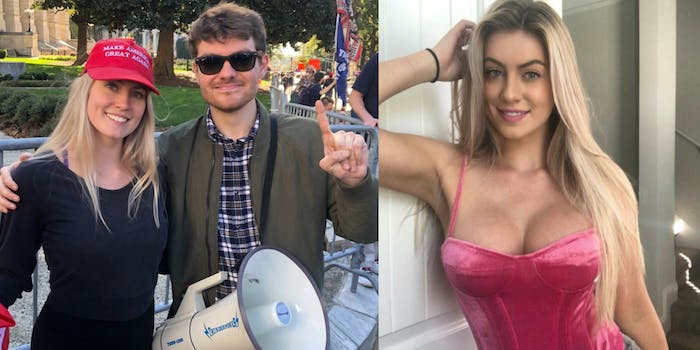 'What happened to 'no e-girls ever' tho?'

Many members of Nick Fuentes’ white nationalist “Groyper Army” are displeased that their leader took a picture with an OnlyFans model.

Rachel Hejduk, who is an OnlyFans content creator, posted the photo of herself with Fuentes to Twitter. “Super cool to see @NickJFuentes today at the Georgia State Capitol,” she tweeted on Nov. 19

His followers quickly began pointing to an old clip of Fuentes, in which he preaches that “no e-girls” are allowed. People seem to think the photo goes against that rule.

“NO E GIRLS!” another commenter wrote.

While many fans were upset, a few groypers showed support for Fuentes. One user on Twitter replied, “Based baddie.”

Fuentes, on his nightly DLive stream, frequently says the role of a woman is to be in the kitchen and has a motto of “no e-girls.”

And while Fuentes didn’t tweet—or even retweet—the photo to his 125,000 followers, it was noticed by his loyal following.

One question remains, however: Does Fuentes also have a subscription to Hejduk’s OnlyFans for $6.44 a month? The Daily Dot has asked Fuentes that question via email but has yet to hear back.