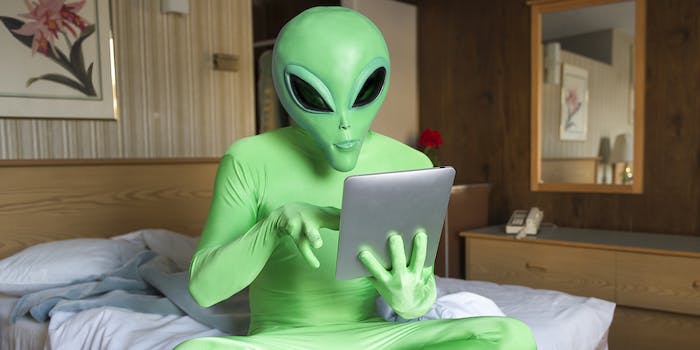 The former 8chan admin is seeking documents on 'alien technology, biology, or communications.'

Ron Watkins, the former administrator of the far-right message board 8chan, has launched a new website aimed at procuring documents about aliens.

Watkins announced the new venture in his popular Telegram channel on Wednesday, which boasts more than 230,000 subscribers.

“With humanity on the brink of alien disclosure, do you really trust the government to tell you the whole truth?” Watkins said.

The website includes links to a new Telegram page for AlienLeaks, which has already garnered more than 13,000 followers, as well as an email address and PGP key for encrypted communications.

The Daily Dot also found that the document submission page, which is hosted on the dark web, appears to be connected to the same domain as VanwaTech—the service that hosts 8kun and previously hosted 8chan.

Watkins was the admin of both notorious message boards before stepping down in November of last year. Given his previous role, Watkins has long been suspected of having connections to the “Q” account that posted on both boards and sparked the QAnon conspiracy theory.

The move is not entirely unsurprising for Watkins, who has been known to shift his focus from topic to topic in an apparent effort to remain relevant.

After stepping down from his admin role last year, Watkins portrayed himself as a voter fraud expert on Twitter and helped propel many of the false claims surrounding the 2020 presidential election. As of late, Watkins has also pushed many of the debunked claims related to the ongoing audit by Republicans in Arizona.

With recent viral reporting on the Pentagon’s interest in Unidentified Flying Objects (UFOs), now referred to as Unidentified Aerial Phenomena (UAP), Watkins may be attempting to stay ahead of the curve.