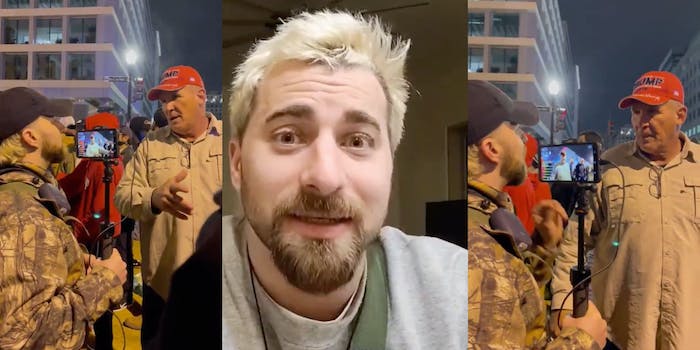 Hundreds of protesters gathered in Washington, D.C. Tuesday evening ahead of the official certification of the Electoral College planned for Wednesday. Among the hordes of conservative protesters hoping to alter the results of the 2020 election was far-right streamer Baked Alaska, who recently tested positive for COVID-19.

Wednesday’s certification process is the final official step before President-elect Joe Biden is sworn into office on Jan. 20. It has been hyped as the “last chance” for protesters and members of Congress to stand in the way of the election results. Thousands of far-right protesters are set to gather in D.C. as the results are certified, but a few eager souls arrived early to the party. Footage shows numerous unmasked protesters, often sporting Trump regalia, praying, sharing election conspiracy theories, and arguing over the election results.

One participant, in particular, caught people’s eye after he was seen discussing the purpose of the far-right protest with another attendee. Baked Alaska, a streamer and one of the far-right’s most effective internet trolls, was recorded wandering the crowds, maskless, despite recently testing positive for COVID-19.

A video shared by @davenewworld_2 shows Baked Alaska, whose real name is Tim Gionet, conversing about storming the Capitol with another protester. In another year, under another president, this conversation may have been the most noteworthy takeaway of the night. Instead, it was Baked Alaska’s status as a COVID-19 carrier that caught people’s attention.

Soon after @davenewworld_2’s video started making the rounds, people began sharing a Jan. 4 clip of Baked Alaska discussing his positive COVID test. According to the video, Baked Alaska believes he contracted COVID-19 from a bouncer at Gilligan’s. His supposed plans to sue were apparently put on hold so that he could attend a crowded protest, maskless, during a pandemic.

The majority of other attendees visible in the initial clip are also maskless. Another clip of the evening shows a crowd of several hundred members of the Proud Boys sporting Trump garb and uncovered faces in a similar area of downtown D.C.

The baffling one-minute clip displays several belligerent Trump supporters, one clearly itching for a fight, arguing with another man. The video is a lesson in toxic masculinity, showing a group of antagonistic men dissolve into rage-filled puddles of disputatiousness. One repeatedly strikes a nearby sign while his fellow protesters lose themselves to unhinged tantrums and screaming matches.

The amount of spittle exchanged in the incessant shouting matches between protesters is bad news for the crowd of unmasked individuals. Baked Alaska is the only protester confirmed to have the virus thus far, but chances are good that at least one or two uncaring or asymptomatic protesters were also in attendance.

Considering many of the attendees likely don’t believe the virus is real, however, Baked Alaska’s positive status is unlikely to discourage any protesters from showing up.