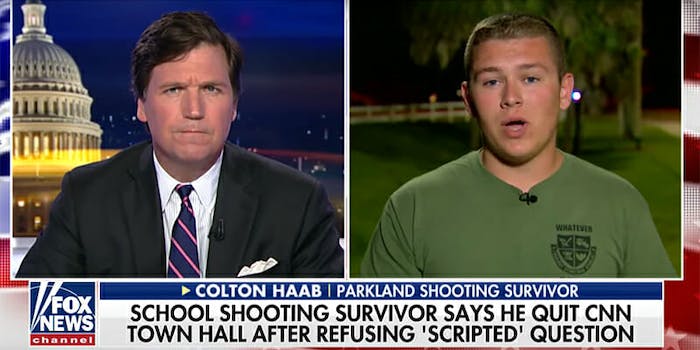 CNN said he doctored the emails.

The father of a Parkland school shooting survivor reportedly admitted Tuesday to altering an email in an exchange with CNN and sending the altered email to other outlets, including Fox News.

Glenn Haab, the father of Marjory Stoneman Douglas High School junior Colton Haab, “acknowledges omitting some words from the email but says he didn’t do it on purpose,” the Associated Press reported.

CNN had previously said Glenn Haab doctored emails to push a claim that the network provided “scripted” questions for his son to read at CNN’s town hall debate on guns and school safety on Feb. 21. Haab declined to allow his son to participate in the town hall.

To prove it hadn’t told Colton Haab what to say at the televised debate, CNN released an email exchange between a network producer and Glenn Haab. After he sent a long speech, CNN asked that Colton Haab only ask a question “that he submitted” due to time constraints.

When he sent the correspondence to other outlets, Glenn Haab had omitted the phrase “that he submitted.”

“School shooting survivor says he quit @CNN Town Hall after refusing scripted question.” @TuckerCarlson. Just like so much of CNN, Fake News. That’s why their ratings are so bad! MSNBC may be worse.