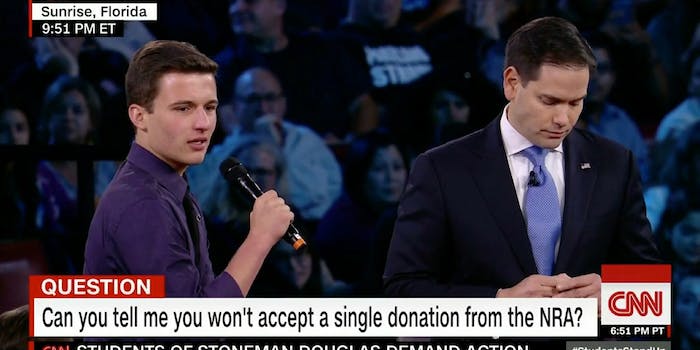 Meanwhile, Rubio said he stands by his donation from the NRA.

Throughout the evening, Rubio’s answers were met with a mix of applause and boos, the latter requiring people asking questions and moderator Jake Tapper to request that the crowd allow Rubio to respond.

In speaking to Fred Guttenberg, whose daughter Jaime died in the shooting and whose points were met with thunderous applause, Rubio said he didn’t support an assault weapons ban, explaining that gun manufacturers would find ways to get around the ban and render such policies pointless. Instead of chasing loopholes, he said, it’s more important that dangerous criminals not be able to buy guns of any kind.

Guttenberg was not pleased. “Your answer speaks for itself,” he said.

Rubio, however, did say that he supported raising the age limit for legally obtaining AR-15-style rifles, which was used in the Parkland shooting, from 18 to 21. He also supported banning bump fire stocks, as well as implementing a system that would allow “potentially unstable people” from temporarily losing access to firearms.

Rubio tells a teacher who sheltered kids in her classroom during the shooting that he doesn’t support Trump’s suggestion of arming teachers #StudentsStandUp https://t.co/umRp5V1c2n https://t.co/ltww7hm2W9

While Rubio also told a teacher that he didn’t support President Trump’s call to possibly arm teachers in classrooms—and said he would reconsider his position on limiting the size of magazine clips when asked by a student who had just enrolled in the military—he faced significant pushback during his conversation with student activist Cameron Kasky.

“So right now, in the name of 17 people, you cannot ask the NRA to keep their money out of your campaign?” Kasky asked.

According to the Center for Responsive Politics, Rubio has accepted more than $3,303,335 from the National Rifle Association. However, Rubio defended his acceptance of NRA donations, attempting to pivot the conversation toward “moving forward and preventing this from ever happening.”

Florida school shooting survivor Cameron Kasky challenges Sen. Marco Rubio: "Can you tell me right now that you will not accept a single donation from the NRA?" https://t.co/LiU42QFBEv #StudentsStandUp https://t.co/p6jlUGFxOs