Don't be out of the loop.

Vine is a virtual breeding ground for memes and Web culture witticisms. Before you heard of “on fleek”, it was being tossed around on Vine. Before everyone from your grandmother to Hillary Clinton knew how to do the Whip/Nae Nae, it was making the rounds on Vine. We can thank Vine for Duck Army, for “That feeling when….”, for the countless, nameless children whose sole claim to Vine stardom is falling, getting knocked down, or saying something funny on-camera and racking up millions of loops.

For the beginner, searching through the weird, wonderful, wild jungle of Vine can seem intimidating. Luckily, we have some tips and tricks that can help you navigate.

You can record and edit video on Vine with a touch of a finger. But what if you want to be the star of your own Vine? If you have an iPhone, you can simply turn on Assistive Touch to shoot a hands-free Vine. Then select Create New Gesture. Place your finger on the screen and keep it there for six seconds. Press Save on the right-hand corner and give your gesture a new name (i.e. Vine, Vine hands-free).

You will then return to the Assistive Touch menu, where you’ll see your new gesture in the menu. Turn on Assistive Touch, and you’ll now see a white dot with a grey border on the bottom of your iPhone screen. When you’re ready to shoot a hands-free Vine, launch the Vine app’s camera icon. Then press on the Assistive Touch icon, the Custom star, and finally the new gesture you just saved. It will then register as a tap and hold for six seconds, enough time for you to get in front of the camera and work your magic.

2) Import found footage and other videos onto Vine

How else do you think all those vintage Soul Train clips set to Daft Punk made it on Vine?

Vine allows you to import video that you’ve saved onto your camera roll.

Simply click on Vine’s import icon, which is on the bottom-left hand corner. You can select one video or mash together different saved clips.

3) Conjure up your own magical vines

Have you ever wondered what kind of camera trickery went into the “hand of God” magical vines?

Thanks to Vine’s Ghost feature, anyone can re-create such movie magic. Clicking on the Ghost icon allows you to see a see through image of the last frame of your first shot. You can then frame your second shot at that exact same position, allowing you to remove, switch out, or introduce new objects into the shot. The Daily Mirror breaks down how it used Vine’s Ghost feature in its own newsroom.

4) Use hashtags to discover new Viners and get discovered

Hashtags are as much of a unifying force on Vine as on Twitter or Instagram. But if you’re looking for a much-envied revine, the right hashtag can propel you from obscurity into stardom. Hashtags like #fail and #musicthatdontmatch encompass entire Vine tropes and can link together like-minded Viners.

What are some good sources for Vine hashtags? Vine’s list of “Trending Tags” on the left side bar of Vine’s homepage should always be a go-to. Another good resource is VineRoulette, a useful site where you can view both the top Vines and top hashtags. 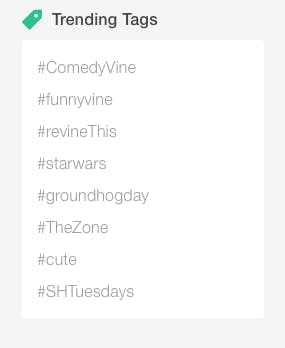