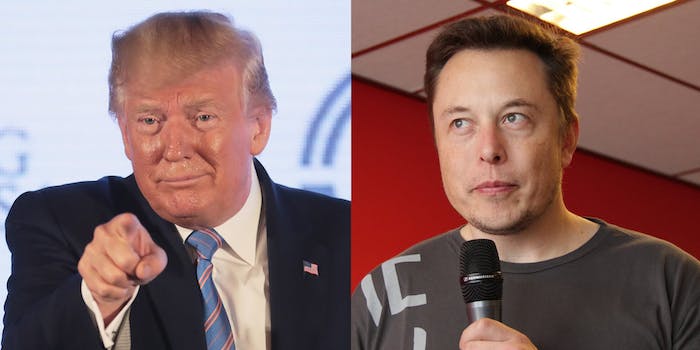 President Donald Trump has thrown his support behind Elon Musk reopening his Tesla plant in California against the guidance of local orders that kept it closed due to the coronavirus pandemic.

Trump weighed in on the situation on Tuesday, saying California should allow Musk to open the plant “NOW.”

On Monday, Musk said production started at the California plant “against Alameda County rules.” He added that he hoped only he would be arrested if it came to that.

In a statement on Monday, Alameda County said it has worked with the company to “present a plan for reopening” the plant “that ensures the safety of their thousands of employees and the communities in which they live and work, and that also aligns with local and state requirements.”

A deal has not been reached though, and Musk’s plant appears to be operating in violation of the county’s rules.

On Twitter, Trump supported Musk’s reopening of the Tesla plant.

“California should let Tesla & @elonmusk open the plant, NOW. It can be done Fast & Safely!” the president tweeted.

Musk has pushed for the California plant to reopen since late March when the state went into a stay-at-home order, even filing a lawsuit against Alameda County.

On Monday, the billionaire also threatened to move Tesla’s headquarters to Texas or Nevada in protest of the closure.