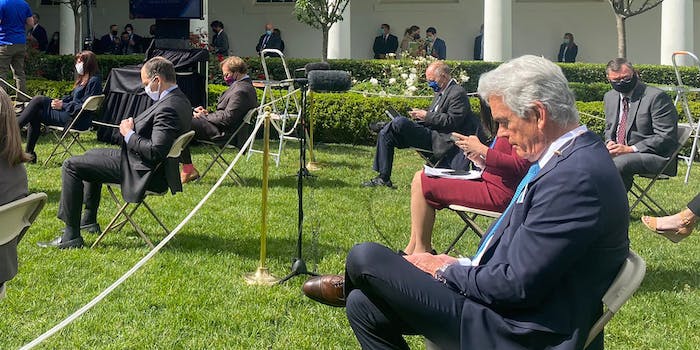 Yesterday, President Donald Trump held his first briefing since several cases of coronavirus were reported in the White House.

As such, the press conference was held outside, and masked members of the White House Press Corps walked up to a solitary microphone to ask a question of the president.

It made for a surreal scene.

It also made for some petty drama. ABC’s Jon Karl took pictures of the press corp adorned in face gear, and he singled out Fox News’ John Roberts for not wearing one.

Karl’s tweet, though not explicitly, was trying to flag the partisan divide on masks. In Congress, Democrats have been more inclined to wear them than Republicans.

That division reflects general national sentiment, as conservatives have been more inclined to resist widespread behaviors in response to coronavirus.

In posting a picture of Roberts, Karl wasn’t chiding a colleague, he was attempting to call out all of Fox and its viewers.

Roberts responded that he was keeping his distance, which is correct. The CDC officially recommends “wearing cloth face coverings in public settings where other social distancing measures are difficult to maintain.”

Even in hard-hit New York, the recommendation is still that a mask is needed where you can’t maintain your distance.

Roberts also retweeted a post showing him wearing a mask at the press conference, one which called Karl “petty.”

It’s not clear how long Roberts had his mask off, but it is fun to remember that the people tasked with covering the president in the midst of the pandemic still find time to tattletale.