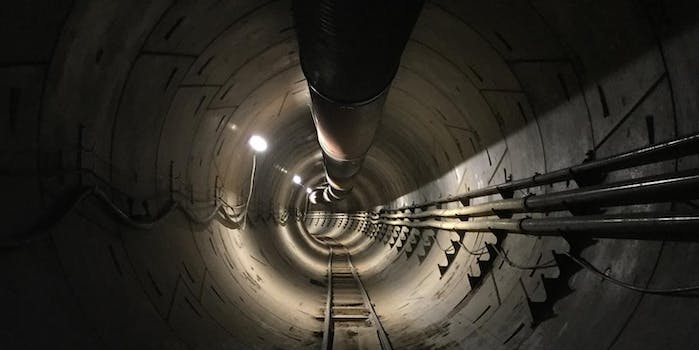 Musk says the tunnel will be open in a few months.

The inaugural Boring Company tunnel underneath Los Angeles is almost complete, according to a post published by Elon Musk on Instagram Thursday night.

“Pending final regulatory approvals, we will be offering free rides to the public in a few months,” Musk wrote. “Super huge thanks to everyone that helped with this project. Strong support from public, elected officials & regulators is critical to success.”

In the video, the camera flies backward through the tunnel, passing a few workmen and stopping at a complicated set of traffic lights before thrusting forward again. At the end, you see the logo for The Boring Company.

Over two million people have already viewed the post, which also promises that once the tunnel is deemed fully operational, the system will give priority to pods for pedestrians and cyclists for less than the cost of a bus ticket.

Musk also said on Twitter that the company’s hyperloop tunnel that would connect New York and Washington D.C. is already in the works, with plans to connect L.A. and San Francisco in the future.

Already started DC to NY route.
Hopefully start LA to SF next year. That will be true @Hyperloop w pressurized pods in near vacuum tunnels & faster than jetliner.

Back in October, Musk shared the first photo of the L.A. tunnel and explained that the goal is to use low-cost boring machines to build a series of interconnected tunnels and transport cars on high-speed “skates” that run on electric rail lines. He hopes the new transit system could ease Los Angeles’ notorious congestion and eventually make traffic backups across the country extinct.

Musk commented on that Instagram post and explained that “in about a year” the tunnel will run from Interstate 405 to Interstate 101 with exits every mile or so, working like a fast freeway.