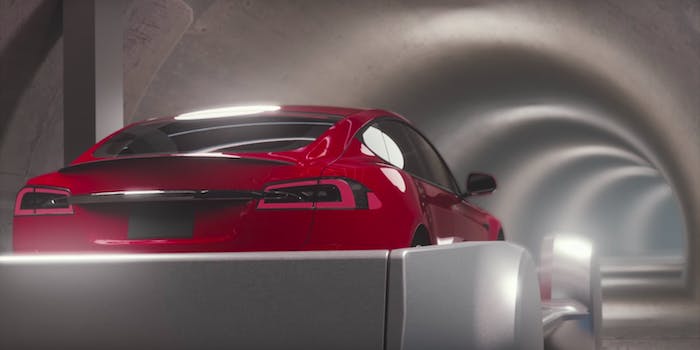 Screengrab via The Boring Company/YouTube

The Boring Company gets a Hyperloop digging permit in Washington D.C.

The hyperloop tunnel would shorten the commute from D.C. to New York City to just 29 minutes.

Looks like Elon Musk’s dream to build a hyperloop connecting New York City and Washington D.C. will be a reality, after all.

Last July the SpaceX and Tesla CEO tweeted he had received verbal approval for the Boring Company to build an underground hyperloop that would connect New York City to Washington D.C., with stops in Philadelphia and Baltimore. At the time, however, officials said they hadn’t made a deal with Musk.

Now the project has been greenlit, according to the Washington Post.

“The Boring Company team has received an early, and vague, building permit from the D.C. government that will allow some preparatory and excavation work at the fenced-off parking lot at 53 New York Avenue NE beside a McDonald’s and amid the construction cranes of Washington’s booming NoMa neighborhood,” the Post said.

Hyperloop is a high-speed transit system concept created by Musk in 2013. A number of startups have tried to bring his vision to reality in recent years, including Hyperloop One, which successfully completed its first-ever full-scale test run last summer. To advance his hyperloop efforts, Musk created the Boring Company, a tunneling company designed to build a vast network of high-speed transit tunnels underneath our current infrastructure.

The total trip time on 800 mph hyperloop between Washington D.C. and New York City would be just 29 minutes—a much shorter trip in comparison to the 3-hour commute currently promised by AmTrak. This would be revolutionary, as Engadget pointed out, because commuters could easily work in Manhattan and live in Philadelphia for one-tenth the price. It’s unclear how expensive it would be to use the tunnel.

The plans for the tunnel are still in the preliminary stages, with the Boring Company still unsure what different kinds of building permits would be needed to create the tunnel. The project, however, has already received backing from the White House Office of American Innovation, led by President Donald Trump’s senior advisor and son-in-law, Jared Kushner, as well as Maryland Gov. Larry Hogan.