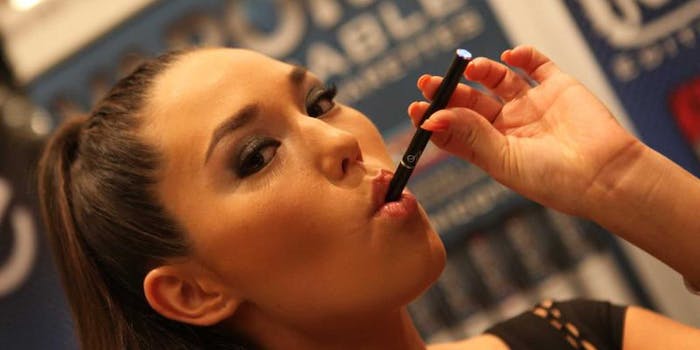 It's been a bad week for e-cigarettes.

The myths about e-cigarettes abound.

At the very least they’re a good way to wean yourself off regular cigarettes. (Seems unlikely.)

Who knows! (I promise you, there’s no way this is going to end well.)

If your common sense has been completely deficient this whole time and you’ve gotten suckered not only into smoking cigarettes (full disclosure: guilty) but also into smoking those insane e-cigarettes, well, this has been a rough couple days for your self-esteem. Yesterday, the JAMA Internal Medicine journal published a study claiming that e-cigarettes will not in fact help you stop smoking cigarettes—gasp!—just a day after the New York Times reported that the neurotoxic “e-liquid” you’ve been vaporizing into your lungs could kill a child if you’re not careful with it.

Not having used randomized, controlled studies, the JAMA report is less than conclusive—at least from a scientific or medical standpoint. But it seems e-cigarettes are not the best way to quit smoking.

“In terms of the immediate poison risk,” the Times reminds us, “e-liquids are far more dangerous than tobacco, because the liquid is absorbed more quickly, even in diluted concentrations.”

“Tiny amounts, whether ingested or absorbed through the skin, can cause vomiting and seizures and even be lethal. A teaspoon of even highly diluted e-liquid can kill a small child.”

By the way, e-cigarettes have grown into a $2 billion industry since 2004. Whoops!