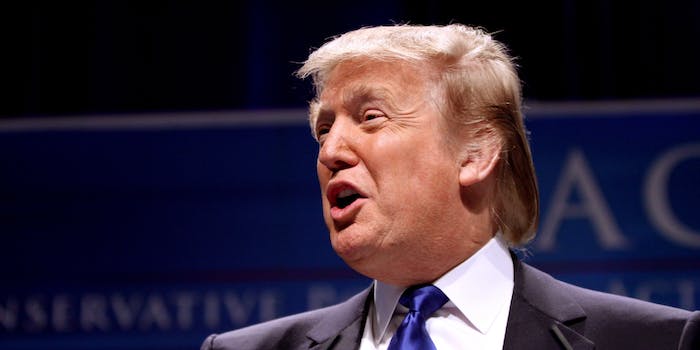 A day after receiving his intelligence briefing regarding Russia’s role in the hacking of the 2016 election and when it was revealed Russian President Vladimir Putin ordered the sabotage to help Donald Trump and hurt Hillary Clinton, Trump tweeted Saturday morning that the election actually wasn’t affected because “the voting machines weren’t touched.”

Intelligence stated very strongly there was absolutely no evidence that hacking affected the election results. Voting machines not touched!

Only reason the hacking of the poorly defended DNC is discussed is that the loss by the Dems was so big that they are totally embarrassed!

These were continuations of the argument Trump made Friday after the U.S. intelligence community released a 25-page declassified report about Russia’s role in the November election in which it said with high confidence that the Russian government used cyberattacks and propaganda to hurt American voters’ faith in the election system.

“We assess Russian President Vladimir Putin ordered an influence campaign in 2016 aimed at the US presidential election,” the report reads. “Russia’s goals were to undermine public faith in the U.S. democratic process, denigrate Secretary Clinton, and harm her electability and potential presidency. We further assess Putin and the Russian government developed a clear preference for President-elect Trump.”

Said Trump in a statement after meeting with the intelligence community: “While Russia, China, other countries, outside groups and people are consistently trying to break through the cyber infrastructure of our governmental institutions, businesses and organizations including the Democrat National Committee, there was absolutely no effect on the outcome of the election including the fact that there was no tampering whatsoever with voting machines. There were attempts to hack the Republican National Committee, but the RNC had strong hacking defenses and the hackers were unsuccessful.”

Earlier Friday, Trump said the continued discussion about the election hacking was a “political witchhunt” and he asked Congress in a tweet to investigate how NBC gathered “top secret intelligence” before he could see it.

The report also didn’t give evidence anybody actually tampered with the vote, so Trump’s first tweet is half-correct. Except …

As for the “poorly defended” DNC tweet, the report concluded that “Republican-affiliated targets” also were hacked but none of the information was ever released to the public. Also, Trump lost the popular vote by about 2.8 million votes.

For more on what Trump tweets and what it all means, here’s our Trump Twitter database.

Update 9:33am CT: Later Saturday morning, Trump continued to tweet about Russia and how it’d be nice to be friends.

Having a good relationship with Russia is a good thing, not a bad thing. Only "stupid" people, or fools, would think that it is bad! We…..

have enough problems around the world without yet another one. When I am President, Russia will respect us far more than they do now and….

both countries will, perhaps, work together to solve some of the many great and pressing problems and issues of the WORLD!