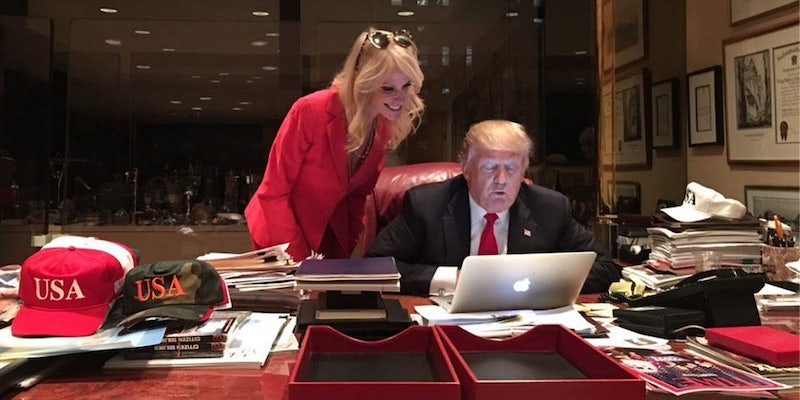 'I know a lot about hacking.'

If there’s anybody who knows plenty about hacking, it’s President-elect Donald Trump. So says Donald Trump, at least.

And if there’s anybody who’s got a solution to hacking, Trump says, it’s most definitely Trump. His proposed answer to the issue? People physically taking messages to other people.

“I don’t care what they say, no computer is safe,” Trump told the press pool Saturday night, via Business Insider. “I have a boy who’s 10 years old, he can do anything with a computer. You want something to really go without detection, write it out and have it sent by courier.”

Trump—who recently said the computer age has “made it so nobody knows exactly what’s going on”—has been defiant in saying he’s not sure that Russia hacked Democratic officials to help him win the 2016 election. He also recently said the country should simply move on from the result. But Barack Obama recently unleashed new sanctions on Russia for interfering, meaning Trump will have to decide when he enters the White House whether to uphold the punishment.

Trump also said Saturday evening that he knows “things that other people don’t know” about the hacking. According to the New York Times, he said the new information would be released “on Tuesday or Wednesday.”

“I know a lot about hacking,” he told reporters. “And hacking is a very hard thing to prove. So it could be somebody else. And I also know things that other people don’t know, and so they cannot be sure of the situation.”