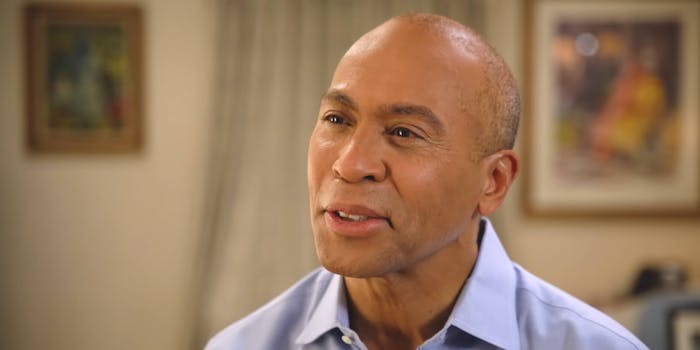 Deval Patrick 2020 fever is not catching on

People flagged a number of things they weren't thrilled about.

Deval Patrick, the former governor of Massachusetts, announced on Thursday that he would join the nearly two dozen candidates vying to get the Democratic 2020 nomination—and there are plenty of people who don’t think the race needs another wealthy venture capitalist.

Patrick announced his candidacy in a video on Thursday.

In a spirit of profound gratitude for all the country has given to me, with a determination to build a better, more sustainable, more inclusive American Dream for everyone:

I am today announcing my candidacy for President of the United States.https://t.co/hObdLNiFMJ pic.twitter.com/fGmI0qxkxS

And, perhaps as a good indicator of how people feel about the former governor’s foray into the crowded Democratic field, the video was amassing a ratio on Thursday morning, with more than 1,800 replies compared to just 449 retweets and 1,100 likes.

The complaints against Patrick’s candidacy touched on a number of issues including: an already bursting-at-the-seams roster of presidential hopefuls, his work at private equity firm Bain Capital, and his removal of two officials at Massachusetts’s Sex Offender Registry Board as they tried to force his brother-in-law to register as a sex offender.

I am sorry but your application for a presidential fellowship is several months late and cannot be accepted. We have many qualified applicants and do not have time to consider your application. Please apply next round.https://t.co/OxxdgaGVFH

I'm guessing it's not a good sign for Patrick that his announcement video is getting ratioed. https://t.co/U4J9d9FyIW

Deval Patrick fired the chairwoman of MA's Sex Offender Registry Board because she wanted to keep Patrick's brother, who was found guilty of raping his wife, on the sex offender registry. One of many reasons why Gov Patrick's campaign is wrong for this moment

It is too late for Patrick to qualify for the upcoming Democratic debate, held next Wednesday, Nov. 20.