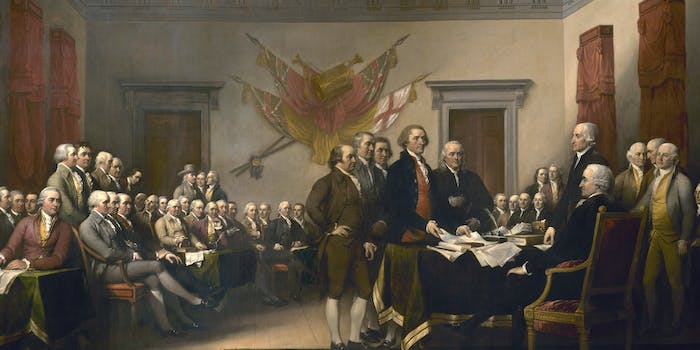 'The people tweeting Defund NPR have obviously never read even the preamble of the Declaration.'

As is tradition, National Public Radio on July 4 tweeted the Declaration of Independence—this time with footnotes to place the document in some historical context. In response, conservatives are calling to “defund” the public broadcasting service.

A July 2 article that NPR published on its annual tradition of reading the foundational American document opened with the observation, “Over the past 32 years, Morning Edition has broadcast a reading of the Declaration of Independence by NPR staff as a way of marking Independence Day.

“But after last summer’s protests and our national reckoning on race, the words in the document land differently.”

That article and tweet noted that despite the document reading “all men are created equal,” that “women, enslaved people, Indigenous people and many others were not held as equal at the time.”

The tweet thread also went on to observe that the Declaration of Independence “also includes a racist slur against Indigenous Americans.” The article clarified that the passage in question “charges that King George III ‘excited domestic insurrections’ among the colonists by Native Americans, who the founding document called ‘merciless Indian Savages.'”

Certain conservatives on Twitter weren’t having it, though. Alt-right pundit Jack Posobiec, for example, said NPR “denounced” the Declaration on the Fourth. Another user responded, “The people tweeting Defund NPR have obviously never read even the preamble of the Declaration or for that matter a history book.”

Lavern Spicer, a Republican Congressional candidate in Florida’s heavily Democratic 24th District, proclaimed, “Today is a great day for America to declare its independence from NPR which is currently attacking our Constitution.”

She added, “Why should we pay for them to express hatred against us?”

“It’s like every few years dumbass conservatives tweet ‘Defund NPR’ like dumbasses,” he remarked, “cuz they need it explained to them that NPR isn’t swimming in federal money and they’re listener funded because they’re dumbasses and nobody on the planet is a bigger dumbass than a conservative.”

Jaime Hageman also weighed in, noting, “If your patriotism is so fragile that you call to defund NPR because they put out a historically accurate article about our country I think you need to reevaluate.”

“Also,” the user concluded, “you’re not patriotic, you’re a Nationalist.”