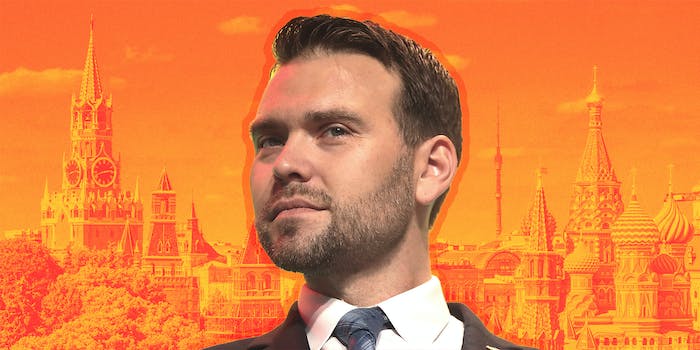 The far-right figure shared links to 'SouthFront' at least 28 times.

A website repeatedly promoted by far-right figure Jack Posobiec is secretly run by Russian intelligence, the U.S. government has claimed.

In an April 15 statement on sanctions against the Russian government, as first reported by the SPLC’s Hatewatch, the U.S. Department of the Treasury accused the little-known website “SouthFront” of being operated by Russia’s Federal Security Service (FSB).

The Department of the Treasury says the goal of SouthFront, which repeatedly promoted Posobiec as well in posts on its website, was to “appeal to military enthusiasts, veterans, and conspiracy theorists.”

“SouthFront is an online disinformation site registered in Russia that receives taskings from the FSB. It attempts to appeal to military enthusiasts, veterans, and conspiracy theorists, all while going to great lengths to hide its connections to Russian intelligence,” the statement reads. “In the aftermath of the 2020 U.S. presidential election, SouthFront sought to promote perceptions of voter fraud by publishing content alleging that such activity took place during the 2020 U.S. presidential election cycle.”

Hatewatch says that Posobiec, who currently works as a correspondent for the far-right conspiracy outlet One America News Network (OAN), shared links to SouthFront at least 28 times during a ten-month period.

The SouthFront stories shared by Posobiec centered around topics including Iran, Syria, Libya, and China as well as the coronavirus pandemic. One story even mocked concerns over the spread of disinformation by Russia.

Since the U.S. Department of the Treasury’s statement, Posobiec has not publicly commented on the accusations against SouthFront.

The website, however, released a blog post in which it did not deny connections to Russia but instead accused “globalist structures” of attempting to “suppress one of the few remaining independent voices.”