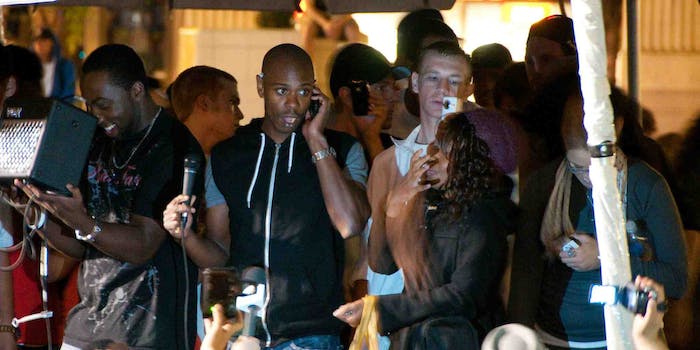 Photo via Howard Kang/Flickr (CC BY 2.0)

This is not a joke.

If you go to any of Dave Chappelle’s scheduled stand-up shows in Chicago and get a phone case, it won’t be from the merch booth. The comedian is teaming up with a tech startup to make sure mobile devices don’t serve as a distraction during his sets.

For the 13 shows scheduled at Thalia Hall in the Windy City, Chappelle will be equipping the audience members with a phone sack from Yondr in order to create a “no-phone zone.”

The Yondr case provides phones with a sock-like pouch that encases the device. Users are able to access their phone freely while wandering throughout the venue. But once they step into the designated, geofenced phone-free area where Chappelle’s performance is taking place, a lock activates and prevents users from accessing their phones.

Since returning to the spotlight after an absence following the end of his beloved sketch show Chappelle’s Show, the comedian has had several run-ins with unwanted audience interaction. Chappelle regularly gets interrupted by overeager fans anxious to hear classic jokes or to shout out catchphrases from characters Chappelle played.

The results of those run-ins have been caught on camera, as has material Chappelle didn’t want to be viewed by wider audiences. Comedians regularly test material to hone it in front of a crowd, and when it’s released before it’s been fine-tuned, it can ruin the joke.

Chappelle’s decision to use Yondr—a partnership brought together by  Live Nation, the company producing the tour—comes after a successful trial of the system by fellow comedian Hannibal Buress. Last June, Buress used Yondr’s services to prevent audience members from capturing footage of his set.

Yondr has also been adopted by several schools around the country, as well as music venues around the San Francisco area, where the company is based.