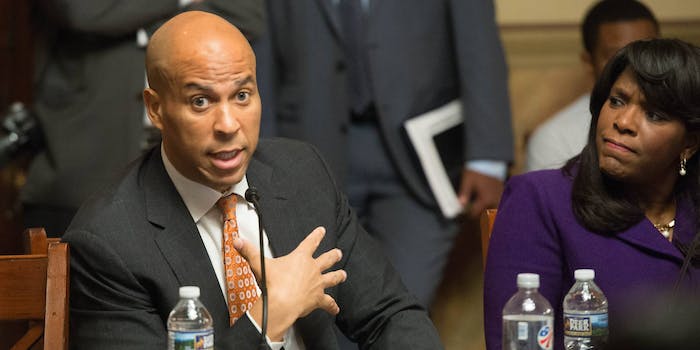 Cory Booker to testify against Jeff Sessions in an unprecedented move

Booker’s office said that it consulted the Senate historian and this would mark the first time a sitting senator would testify against another sitting senator during a confirmation hearing for a cabinet position.

1st time in history: sitting Senator will testify against a colleague. In words of MLK: injustice anywhere is a threat to justice everywhere

“These are extraordinary times and they call for extraordinary measures,” Booker told Chris Hayes Monday night. He also called the decision “a call to conscience.”

While many of Trump’s cabinet picks have raised a cause for concern—most notably for their anti-LGBT views and wishes to potentially leave women and poor perople without healthcare by repealing the Affordable Care Act and defunding Planned Parenthood—Sessions’ nomination is particularly troubling for critics. They fear that as the head of the Department of Justice, Sessions will target blacks, Muslims, Hispanics, women, and LGBTQ people unfairly and is a threat to voting rights. His voting record shows he opposed reauthorizing the Violence Against Women Act after it had an amendment that included the LGBTQ community, and he adamantly opposes all types of immigration. More than 150 civil rights and progressive groups have publicly opposed his nomination.

Most damning against Sessions are accusations of racism that have followed him from his time as a U.S. attorney in Mobile, Alabama. He was rejected as a federal judge by the Senate Judiciary Committee in 1986, with then-Sen. Joe Biden (D-Del.) citing racially insensitive comments Sessions had made to a former deputy, such as calling the NAACP and ACLU un-American. Sessions also prosecuted a number of older black Americans of voter fraud and ordered the FBI to take absentee ballots sent by black-voter outreach activists. As his past has resurfaced in recent months, Sessions has denied allegations that he’s racist.