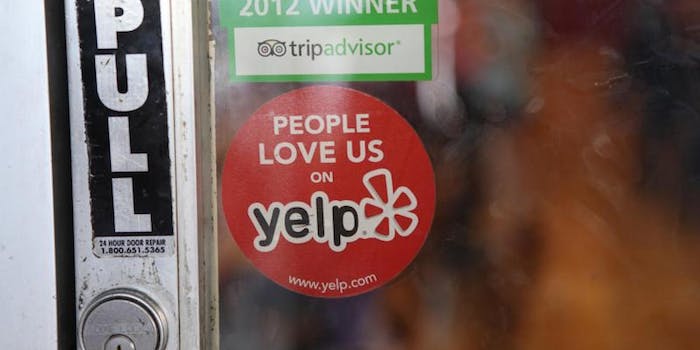 Likely because it sounds so outrageous, the business practice of billing customers who write negative online reviews is not well known, but it is a thing that exists, and now a few U.S. lawmakers are doing what they can to stop it.

Sen. John Thune (R-S.D.), chairman of the Senate Commerce Committee, introduced on Thursday the Consumer Review Freedom Act, a bill which seeks to prohibit businesses from from penalizing consumers who speak out negatively about a company’s products or services.

In a statement, Thune said that online reviews are now an integral part of how Internet users make consumer decisions. “This free market system, which empowers customers, cannot thrive if reviewers face intimidation against airing truthful criticisms,” he said.

Thune’s effort is supported by the Internet Association, a Washington trade group that represents some of the biggest online companies, including Google and Yelp, the Washington Post reports. The group’s president, Michael Beckerman, told the newspaper that the legislation was essential to “protecting freedom of speech online,” which is in turn “fundamental to the success of the Internet.”

“Meritless lawsuits filed for the sole purpose of intimidating consumers and stifling public debate must be addressed by Congress,” Beckerman said.

In an article Thursday, Post reporter Brian Fung recalled the case of a Utah couple charged $3,500 after issuing a not-so-great review about the online retailer KlearGear. The company claimed the pair, Jennifer and John Palmer, had agreed to a “non-disparagement clause,” which was buried in its terms of service, and prohibited customers from doing anything to negatively impact the company’s public image.

As it turns out, KlearGear had actually failed to deliver the products the Palmers had ordered. Nevertheless, the company escalated the claim all the way to a collections agency, devastating the couple’s credit score. A federal judge eventually awarded them more than $306,000 in compensatory and punitive damages, but the entire process, from review to ruling, took roughly five years.

The bill’s sponsors—including Sen. Brian Shatz (D-Hawaii) and Jerry Moran (R-Kan.)—hope to move the bill to markup by the end of the year, according to the Post.