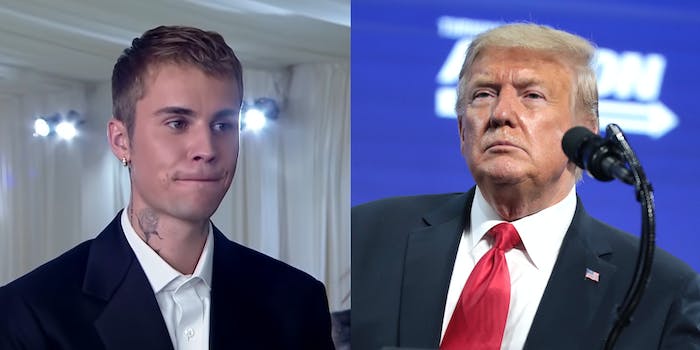 After winning artist of the year at the 2021 MTV Video Music Awards on Sept. 12, Bieber told his adoring fans during his rousing address that “the best is yet to come.”

“Music is such an amazing opportunity and an amazing outlet to be able to reach people to be able to bring us all together. That’s why we’re here right now,” Bieber said. “We’re all here together. We got a lot more in common than we don’t. I look around here and I see so many beautiful faces. I really do believe the best is yet to come.”

Although the phrase “the best is yet to come” is incredibly common and widely used, conspiracy theorists became obsessed with it after Trump used it in his farewell address last January following his loss to Joe Biden in the 2020 presidential election.

“I go from this majestic place with a loyal and joyful heart and optimistic spirit and a supreme confidence that for our country and for our children, the best is yet to come,” Trump said at the time.

The phrase became especially popular among followers of the QAnon conspiracy theory, who believed that Trump was hinting at his imminent return to power.

Despite Bieber having already used the phrase repeatedly in the past, including in a 2017 Instagram post, conspiracy theorists across social media hyped the remark.

Cultivate pleasure and enrich your wellbeing with Dame

Could your bedroom activity use a little more spice? Of course it can! Dame is a sexual wellness company founded by a sex educator and engineering wiz. The team develops and rigorously tests toys based on real human feedback to bring your pleasure to new heights, whether you’re playing solo or with a partner.

Dame stands by its high-quality products, which all come with a three-year warranty and hassle-free returns within 60 days. Visit Dame, and save 10% on your order with the offer code DAILYDOT.

Video of Bieber’s speech was highlighted in the Telegram channel “Pepe Lives Matter,” which is followed by more than 120,000 users.

“Did Bieber just give a hat tip to Trump?” the account wrote. “The best is yet to come!”

The video was also prevalent on Twitter and Facebook, where users applauded the singer for his remarks.

The attention on Bieber by conspiracy theorists dredged up other false claims about the pop star. Some users repeated the popular conspiracy theory that Bieber had been sexually abused by a group of Hollywood pedophiles throughout his career.

“Did Bieber just give a hat tip to Trump? He says the best is yet to come,” one user wrote. “He’s been abused by the Cabal since he was born.”

As reported by the Daily Dot in June 2020, conspiracy theorists alleged that Bieber secretly revealed that his “Yummy” music video was actually about Pizzagate by touching his hat during a live stream.

Yet Bieber was seen fiddling with the garment throughout the entire stream, so much so that one commenter asked him to stop distracting her by playing with his hat.

The absurd claim came shortly after conspiracy theorists alleged that the music video for “Yummy” was filled with symbolism regarding child trafficking and pedophilia.

The Daily Dot reached out to representatives for Bieber, but did not hear back by press time.