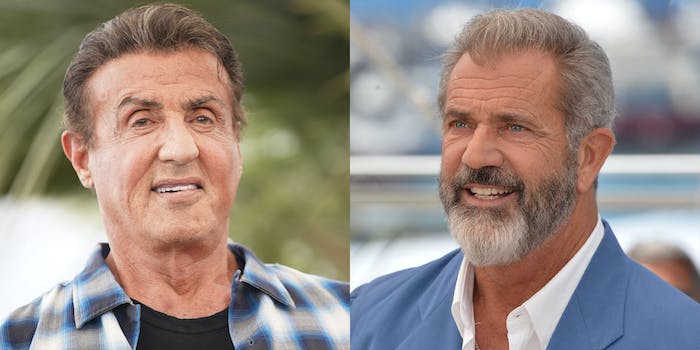 A network of fake accounts on Telegram is posing as right-leaning Hollywood celebrities in order to promote a collectible coin to QAnon followers.

The accounts, which falsely claim to belong to high-profile figures such as Mel Gibson, Sylvester Stallone, and Clint Eastwood, have collectively amassed more than 100,000 followers over the last six months.

The scam preys on conspiracy theorists by drawing them in with promises that secret information regarding corruption and pedophilia in Hollywood will soon be released. Yet once each Telegram channel builds a significant following, users are instead met with an increasing number of posts about a gold and silver coins featuring former President Donald Trump.

One of the most popular accounts is @MelGibsonOfficial, which has amassed over 30,000 subscribers since launching in March. The account spent its first few months sharing posts praising Trump before switching to QAnon-themed topics regarding elite child-eating pedophile rings.

“​​Hollywood is drenched in innocent children’s blood. The references to pedophilia and cannibalism have always been there, but for years they cryptic or symbolic,” the account wrote last month. “I was introduced to these practices in the early 2000s and was threatened with serious repercussions should I ever speak out. And, I don’t just mean my career, I mean my life was threatened, my family’s life would be in danger.”

While the average internet user might easily see through an account proclaiming to be run by one of Hollywood’s most famous actors and directors, countless subscribers appear convinced that Gibson is actually on Telegram.

“Thank you for your courage to speak out when NO ONE would Mel!” one user responded. “I look forward to your future movies that will inspire and unite humanity.”

Alan Nierob, a representative for Gibson, told the Daily Dot that the account in question was not associated with their client.

“Mr. Gibson, nor anyone associated with him, has anything to do with this account,” Nierob said.

As you grow up, the way you use cannabis grows up with you.

Take your weed to the next level with the best online headshops. From subtle stash boxes to sci-fi vapes, this is a classy world away from your old 2 liter gravity bong.

After building up a large subscriber base, the account began promoting other fake accounts that follow the exact same script.

Users were encouraged to subscribe to the “official” accounts for Stallone, Eastwood, and even deceased figures such as Michael Jackson and John F. Kennedy Jr.

Unsurprisingly, Michelle Bega, a representative for Stallone, likewise confirmed that the actor was not on Telegram.

“Mr. Stallone is officially not involved with Telegram,” Bega said. “This is not his account, he does not post on the Telegram site. The account is counterfeit.”

Between late August and early September is when the accounts began hawking the “Official Trump Coin.” The posts compared the physical coin to cryptocurrencies such as Bitcoin and Ethereum.

“It’s true, everything said about these coins and their skyrocket to $400 is true!” the post says. “Those who will have these Trump coins will be treated differently than the others!”

A link to purchase the Official Trump Coins redirects to a web shop for the website Raw Conservative Opinions. The coins are listed as “free” with users allegedly only having to pay for shipping and handling.

While the website features endless 5-star reviews of questionable validity, a profile for the company on the website for the Better Business Bureau is filled with complaints over “Made in China” labels featured on the coin’s packaging.

The Daily Dot sent numerous inquiries to Raw Conservative Options to ask whether it was aware of or involved with the fake Telegram accounts but did not receive a reply.

It remains unclear how many coins have been sold.

Either way, conspiracy theorists appear convinced that big name celebrities on Telegram are providing them secret intel on Hollywood.