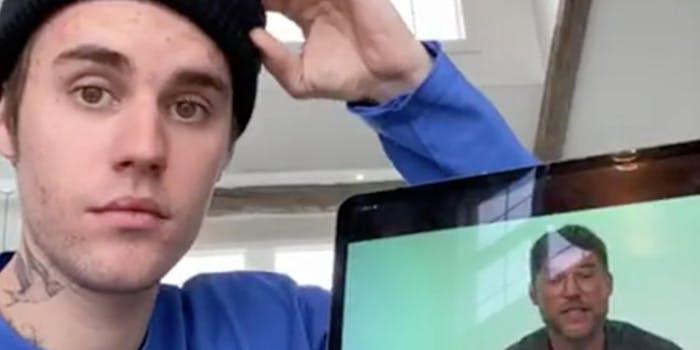 Someone purportedly asked him to touch his hat if the rumors 'are true' during a recent Instagram live stream.

Conspiracy theorists are claiming that Justin Bieber secretly revealed himself to be a victim of child trafficking during a recent live stream on Instagram.

A video of the alleged admission, posted across social media this week, purports to show the pop star sending a secret signal to viewers by touching his hat.

The Canadian, according to a Twitter account affiliated with the QAnon conspiracy, was responding to a commenter who asked him to confirm whether “the stories” regarding his “Yummy” music video were true.

Those so-called “stories” refer to a popular conspiracy that alleges Bieber’s video is filled with symbolism linked to child trafficking and pedophilia.

The original live stream video was first posted to Bieber’s Instagram on May 17 and shows the singer watching a pastor deliver a sermon.

So was Bieber secretly confirming a secret conspiracy involving pedophilia and child trafficking? Probably not.

For starters, there is zero indication that Bieber was even aware of the comment to begin with. The singer, who currently boasts more than 139 million followers, received nearly 1.7 million views on his live stream and attracted well over 2,000 comments.

Like any popular live stream, comments would almost certainly be flooding in at a quick pace. The conspiracy video clearly shows the comment section not moving, meaning whoever filmed the clip purposely stopped on the comment regarding Bieber’s hat.

But the commenter wasn’t even the first to mention the singer’s hat. In fact, the singer was adjusting his hat so much throughout the entire video that at least one viewer asked him to stop.

It appears possible that someone, noticing Bieber fidgeting with his beanie repeatedly, merely added the comment in order to generate a conspiracy of their own.