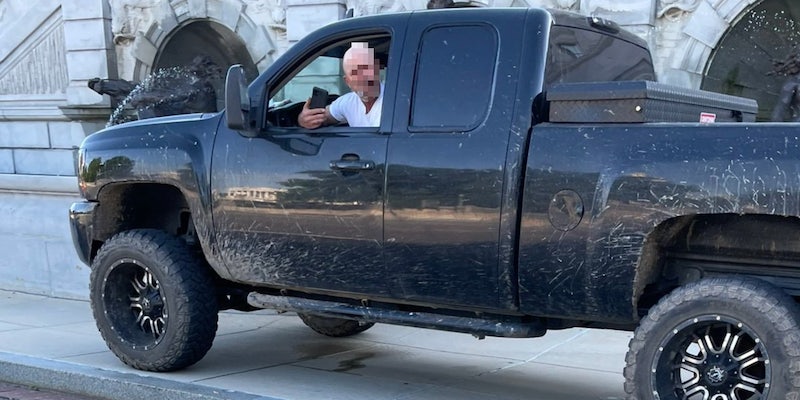 Conspiracy theorists reacted to the arrest of a man making threats near the Capitol in Washington, D.C. last week by claiming that the incident was nothing more than a “false flag.”

The suspect, 49-year-old Floyd Ray Roseberry, parked his truck outside of the Library of Congress last week and told responding police officers that he was armed with a bomb.

Nearby buildings were quickly evacuated as police began negotiations that would finally end the standoff nearly five hours later.

Roseberry, a native of North Carolina, was seen by witnesses tossing dollar bills out of his vehicle while streaming the incident to his personal Facebook page. The video, which also showed Roseberry referring to himself as a “patriot” while criticizing President Joe Biden, was later taken down by Facebook.

Roseberry reportedly also said that the “revolution is on” before telling Biden that the “South is coming for you.”

NBC reporter Tom Lynch spoke with Roseberry’s wife who claimed that her husband, who voted for the first time ever in 2016 for former President Donald Trump, had been upset about the 2020 presidential election.

While many viewed the troubling situation for what it was—a man with purported mental health issues who had likely fallen victim to conspiracy theories about the 2020 election—right-wing conspiracy theorists instead saw an insidious plot to frame them.

The term false flag, which usually refers to a government-backed act of terrorism designed to frame a political foe, almost immediately began trending on Twitter.

In the minds of the far-right, any incident that reflects upon its members poorly, including the Jan. 6 Capitol riot, is almost always deemed a clandestine government provocation.

Whether you’re a cannabis user or simply into alternative medicine, there’s a good chance you’ve heard about Delta-8 THC. Unlike the Delta-9 THC found in what we think of as traditional pot, Delta-8 provides a milder experience. Think of the difference between a cup of coffee and a cup of espresso. But that’s just the beginning. How is Delta-8 different than traditional cannabis, and is it legal to consume it? Let our explainer walk you through the details.

In many tweets on Thursday and Friday, people claimed that Biden had authorized a false flag event to divert attention away from the Taliban’s recent takeover of Afghanistan.

Another user said the incident had the “FBI written all over it” because he believed Roseberry was trying too hard to sound like he was from the South.

Over at the conspiratorial blog the Gateway Pundit, an article which did not frame the incident as a false flag was bombarded by commenters who argued otherwise.

One of the top-rated comments suggested that the bomb threat was made to distract from audits in Arizona.

Conspiracy theorists have been convinced for months that audits across the country will somehow uncover proof of widespread voter fraud in the 2020 election, despite none revealing anything of the sort.

“Another FBI inspired False Flag to keep eyes off of the audit and southern border!” one commenter wrote.

Remarks on patriots.win, a forum for supporters of Trump, were similar.

“Just listen to his video… his ‘southern accent’ is fake as fuck,” one user said. “He’s trying way too hard lmao. LARPing ass FBI or CIA. They even pulled out the jacked up Chevy with some mud on it for this one hahahaha. False flag budget must be getting low.”

Authorities fear that we could see a rise in such incidents, inspired by pandemic restrictions and other antigovernmental sentiments.

Regardless of what happens, conspiracy theorists will undoubtedly have made their minds up about who is to blame.