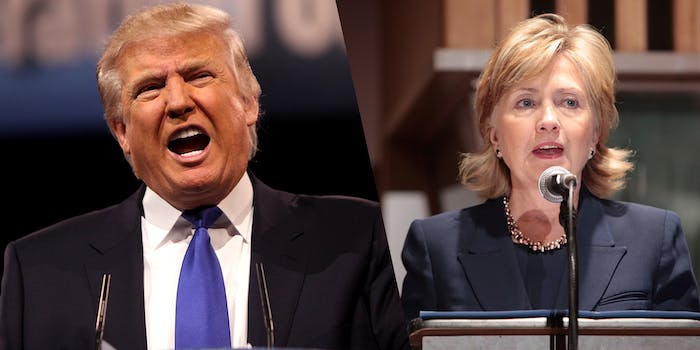 Trump is gaining on Clinton—but the former secretary of state remains in the lead overall.

With just 117 days left until Election Day, the U.S. presidential race remains anything but certain.

Republican Donald Trump and Democrat Hillary Clinton are effectively tied in three key battleground states, according to recent a poll from Quinnipiac University conducted in Florida, Pennsylvania, and Ohio.

In Florida, Trump overtook Clinton with a lead of 42 percent to 39 percent. Clinton held a significant margin (47 to 39) in Quinnipiac’s June poll. While Trump now sits ahead of Clinton in this poll, his lead remains within the margin of error of 3.1 percentage points.

Ohio voters are equally divided between the Republican and Democratic candidates, with both Trump and Clinton receiving 41 percent of respondents’ support. Both candidates polled at 40 percent in June.

Including third-party candidates, the divide remains nearly the same for the major-party challengers—37 percent for Trump and 36 percent for Clinton—with Johnson at 7 percent and Stein at 6 percent.

Quinnipiac’s July results from Pennsylvania give Trump a thin lead (43 to 41) in July, while Clinton led Trump by the same two-point margin in June. Johnson does slightly better in Pennsylvania (9 percent) than in the other two swing states, while Stein has just 3 percent support. However, with the third-party candidates factored in, Trump’s lead rises to a statistically significant 40 percent to Clinton’s 34 percent.

The results of the head-to-head matchups between Trump and Clinton in Ohio and Pennsylvania both fall within the margin of error, meaning the results of the polls should be seen as statistical ties.

On average, Clinton maintains a thin lead over Trump in Ohio and Pennsylvania, according to Real Clear Politics, while Trump has a average lead over Clinton in Florida of just 0.2 percent.

As Quinnipiac notes, “since 1960 no candidate has won the presidential race without taking at least two of these three states.”

Nationally, Clinton remains ahead of Trump with an average lead of 4.3 points, a significant drop from her 11-point lead at the beginning of July, before the U.S. Department of Justice chose not to indict Clinton for her handling of classified material on her private email during her time as secretary of state.

An ABC News/Washington Post poll released on July 11 found that 56 percent of Americans believe Clinton should be charged with a felony for her email conduct.

Despite the dip in Clinton’s popularity, the election forecast from FiveThirtyEight gives Clinton a 77.4 percent chance of winning the presidency.